“It’s like, how much more black could this be? And the answer is none. None more black.”

The recent news that Cannondale’s new 2014 kit design will be a mainly black affair has been greeted by cycling’s fashion watchers with barely more than a raised eyebrow. ‘Copying Sky’ is the main criticism that most can muster and, given that nearly all pro teams are seeking to reproduce the British team’s training programmes or marginal gains techniques in some shape or form, that in itself is hardly a withering accusation. But, after years of what has often amounted to an arms race of garishness, is there more to this latest rejection of what has been termed elsewhere as ‘Euro Gaud’ than simply aping the most successful team around? 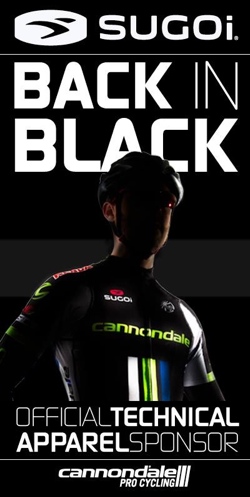 On one level Cannondale’s rejection of bright colour is an obvious way of turning their back on the team’s most recent incarnation as Liquigas. Constrained by the corporate colours of the Italian energy company, the team’s lime green kit was up there with the lurid pink of Lampre and the Day-glo yellow of ViniFantini for eye-watering loudness. Indeed, some lesser Italian races – when the finishes were often contested between multiple members of these three teams – were such a visceral assault on the eyes that they should really have carried some kind of warning for viewers of a sensitive disposition.

In World Tour races, where a modicum of balance was brought through larger starting numbers and the less shouty kits of some of the other teams, Liquigas could easily be seen cutting a swathe through the bunch as they sought to deliver Peter Sagan to the business end of the action. And this was the point. Visibility matters. Ever since races started being televised in colour – and the introduction of lycra allowed the easy printing of a much wider range of colours and patterns – teams have fought to distinguish themselves from their rivals with ever increasing brightness. 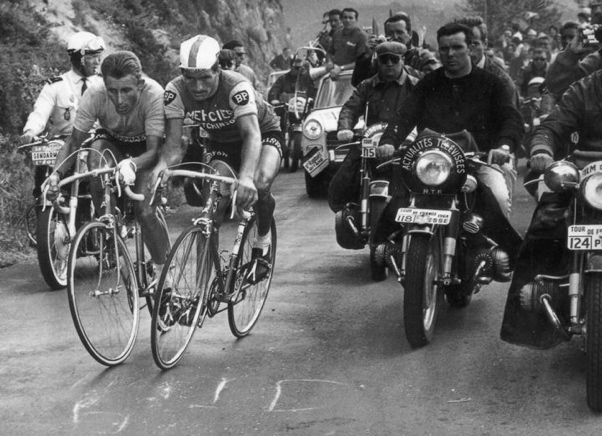 Colour has long existed in the pro-peloton but it took the advent of TV coverage and advertising to release it from the shackles of national colours or a simple horizontal band. And as the colours change so do our impressions of the riders wearing them. In the famous picture of Jacques Anquetil and Raymond Poulidor going shoulder to shoulder on the Puy-de-Dome in 1964’s Tour, Poulidor is wearing a predominately purple jersey. But the black and white photograph, which appeared in all the news reports of the day and which remains the de facto rendering of the encounter, hides all this and the strip looks to be a very serious dark grey. Anquetil’s much lighter jersey – the maillot jaune – fades out in comparison, subliminally giving Poulidor the upper hand in their now eternal battle. In colour photos taken of the same scene the power of yellow shines through and Anquetil appears the stronger man. Colour affects our minds as well as our eyes.

The only kit to fully make the transition across both the B&W and colour era unscathed is the iconic chequered flag jersey of Peugeot. Absent of colour and glorious in it’s design purity, it stands out as boldly in black and white 60’s footage of Tom Simpson and team mates as it does in the hyper coloured, late 80’s surroundings of Robert Millar and Sean Yates. Even when measured against the best of the coloured jerseys of the day – La Vie Claire, Systeme U – it remains a classic of understatement which the first Sky kit seemed to be attempting to emulate. 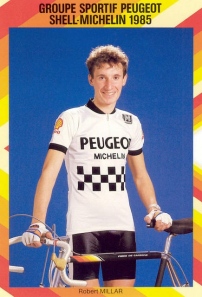 Sky have not always been the head to toe black-clad stormtroopers that bully the peloton today, though we often think of them that way. In their first outing in 2010 the black of the jersey was offset in almost equal measure by white – as does Cannondale’s new kit. As with everything in Sky’s first season the science behind the design was explained with great seriousness and at great length. Black on the lower surfaces of the jersey apparently allowed the riders to disperse their body heat more efficiently, whilst the white upper surfaces reflected heat better and prevented it building up in the first place. The kit was the epitome of the marginal gains ethos of the team. Function over Form was the stated order of the day but it also looked pretty cool – like a killer whale in reverse – and it stood out reasonably well from the rest of the pack by dint of NOT being bang full of colours.

By 2013 however the white areas had been ditched completely. Whatever the original gains were supposed to be they were now deemed too marginal and the now infamous all black kit, the was unveiled. We all know there is nothing new in design and black kits shouldn’t be viewed as such a radically new invention, even in cycling. Molteni had rocked some seriously cool, seriously black kit back in the days of Merckx, who luckily had the jet black sideburns and hair to complete the look. And you can bet your last spare tub that most of the riders in the 1920’s were sporting more noir than a pantomime villain. With the atrocious road surfaces and limited facilities for washing, they certainly they would have had that appearance at the end of races, even if not at the beginning

Non-cycling sports have a decidedly richer history with black livery and kit. Whatever the sport, the coolness of all black kit is defiantly universal. Consider these few offerings. Formula 1’s ‘John Player Special’ Lotus’ of the late 1970’s, the eponymous All Blacks of New Zealand rugby, and Mike Tyson’s brutally plain black shorts of his unstoppable early years. The now-defunct LA Raiders American football franchise also played in all black and traded heavily on the bad-boy image it helped them to conjure as a means of intimidating opposition before the game even started. They also used the single stripe on the helmet to great effect – just like Sky. Even football referees looked to have more authority until they started messing with the simplicity of their black strip by adding coloured collars and sponsorships badges.

Sky had always held the Yul Brynner/Johnny Cash “bad man in black” card somewhere in their deck. They arrived on the scene with their ultra modern, ultra sophisticated, ultra black, battle station of a team bus. It was promptly christened the ‘Death Star’ by David Millar, which was probably exactly what Sky would have wanted. So it wasn’t exactly a volte face when they came out in all black kit. But the shift it brought with it was very important.

The redesign made sense in both aesthetic terms: it was simpler, it was cooler. It clearly defined the fact that the kit was no longer being designed by Adidas but by the high-end supplier Rapha. It also worked much better as a method of self communication for the team. The widened “We Ride It Every Day” blue line running down the spine speaks of the team’s ideals – not their sponsor’s – and being set against the neutrality of only black makes this key element more apparent than before. All in all, the all black strip is a clearer message of the teams intentions.

Contrary to expectations the change to all black also worked in terms of visibility. In the all important helicopter and lead motorbike shots the phalanx of black clad riders was as distinct amongst the myriad colours of the peloton as a bold hue would be against a sea of grey. Of course, Sky’s tactics of often leading from the front does assist this. The sight of a line of black clad riders interminably setting the pace or relentless chasing down breakaways has become an industry standard and even a suitably dark name – Creeping Death – has been coined to describe it. This wouldn’t have happened if they dressed in pink, green or even silver. There is no doubt about it: if you are going to be a team who sits on the front all day, dictating the pace and commanding much of the TV time it’s better if you look like badasses whilst you are doing it.

The colour black now both defines and reflects the image of the Sky – much more so than the blue stripe, which they have successfully changed for yellow in the Tour at times. The black has become a shorthand for the singlemindedness and ruthlessness of the team’s ambitions and also of the success that they have enjoyed. Other teams who are now copying the colour are making an outwardly visible gesture in the hope they are viewed on similar terms.

So where next? I still think we are a long way off a predominately darkly clad peloton. Movistar have a relatively restrained kit, as do Saxobank, but these will always countered by the bright tones of an Astana or a Katusha. The rainbow nature of the peloton as a whole won’t be disappearing anytime soon but I think we will see a lot less of the more migraine-inducing designs. Sub-consciously or otherwise, the new sophistication will trickle down from the top.

As coverage and costs increase there will always be a number teams in flux with sponsors and owners changing on a regular basis. This will lead to new rounds of kit designs and it will be interesting to watch where many choose to go. For those teams lucky enough to have a single main sponsor who does not have a lurid corporate colour scheme in need of some extra airtime I predict that the future could well be black. Just don’t bet against coloured arms or single stripes of colour like in the old days. Well, this is fashion we are talking about. And much like the wheels on the bikes themselves, everything a la mode eventually comes full circle.