For a man who made a career of letting his legs rather than his mouth do the talking, An Evening with Sean Kelly at Cadence Performance in Crystal Palace this week could easily have been a painful experience for both speaker and audience. Kelly makes no secret of the fact that he is not a natural raconteur but he was most certainly a natural competitor and, just like in his racing, his force of character and professionalism ultimately outweighed any potential shortcomings in what was a very enjoyable and illuminating evening.

Kelly’s autobiography, “Hunger” (£18.99 Peloton Publishing) – short-listed for a number of sports writing awards – is an equal surprise coming from the quiet man of Carrick-On-Suir. Ghost-written by Lionel Birnie, the story of ‘King’ Kelly’s racing career was wrestled from the five times world No. 1 over a two year period, race by race, piece by piece, word by word. A long, hard road with many difficult, bumpy sections along the route. Fittingly for the two-time winner it was a veritable Paris-Roubaix of a task.

Birnie was alongside Kelly at Crystal Palace, adding context and anecdote to the Irishman’s recollections. Both were ably hosted by Daniel Friebe – author of ‘Merckx’,  ‘Mountain High’ and ‘Mountain Higher’ – who played the role of MC and posed the first 40 minutes of questions. Initially Kelly applied himself slowly to the task, as though lowering himself onto the infamous boil which cost him the 1987 Vuelta; testing the novel pain of speaking in front of 150 people instead of from the hidden confines of the Eurosport commentary box. Or maybe he was just subconsciously following the advice of the old patron Hinault, who often decreed that the first third of a stage would be carried out at a pace of his liking. Everyone held their breath and wondered how it would go. 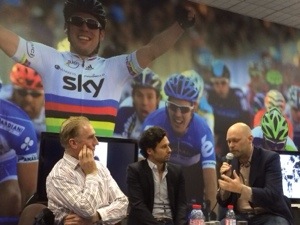 Birnie explains how he wrestled the story from Sean whilst he and Friebe look on.

Whatever the truth of the slow start, a squawking microphone did nothing to settle any nerves, nor did the fact that Kelly and Birnie were almost late having got stuck in traffic. Kelly, well versed in the arts of arriving at the last possible moment from his sprinting days, seemed less concerned by either of these issues than the act of speaking itself and initially stuck to the wellworn method of recounting the race action that can also be found in the book. Later, in the middle section – before questions from the audience gave rise to a few new hesitations – he visibly relaxed and fleshed out many of the stories with just a few iceberg tips of emotion. Pride, regret, respect. All were there. You just had to look hard to see them. The everso slightly nuanced way he spoke about his old boss Jean De Gribaldy and the Nys’s – the Belgian couple whose house he lived at for many years whilst racing – was as emotive for him as a chest-beating rant would be for a less taciturn character. The audience felt it and appreciated the relative candidness and openness.

As the talk progressed Kelly’s voice grew as he settled to his task. A consumate professional, he had prepared well and the training paid off as he warmed up. The verbal sparring grew more free in content and the reserved recitals diminished. A couple of jokey lines appeared, a swear word or two were sprinkled into the mix, a painful truth was occasionally offered.

The audience, predominately male and over 35, clearly knew what to expect from the generally reticent Kelly and encouraged their idol to make a good showing. Friebe and Birnie played their part excellently; gently coaxing Kelly to talk about feelings as well as facts. Kelly generally stuck to the facts but did allow himself to stray a few times and there the pearls were found. His jealousy of Stephen Roche’s meteoric rise out of the amateur ranks, his almost-expressed (but nonetheless clear) love for the Nys’s, his regret at coming desperately close to both the World Championships in ’89 and the Tour of Flanders in ’84. De Gribaldy also clearly made a huge impression on Kelly’s life and he says that much of his later professional career, and even his current life, is still governed by his old master’s voice. Unlike others who consistently wear their hearts on their sleeves, the barest hint of self expression from Kelly was both immediately obvious and obviously sincere. And it was all the more appreciated because of it. 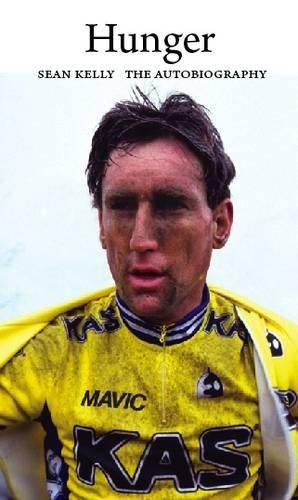 In the second half of the evening he took each question from the audience strictly on his own terms. Happy to answer a question about who his favourite current riders might be – Nibali and Froome because of the hard work both have had put in to reach their achievements (De Gribaldy’s influence is clearly at work again in this selection) – he then simply ignored the second part of the same question: who is your least favourite rider? When Friebe pressed the point on behalf of the original questioner, Kelly simply looked at him and shook his head everso slightly with an equally imperceptible amount of embarrassment . ‘Not answering that one’ was the silent message.

He was more expansive on whether he would prefer to ride today or in his own era. The questioner was astute enough to remove the question of salary from the equation and so the answer was unambiguous. He is entirely happy with his own era. Today the pressure on riders is immense, said Kelly. The circus is bigger, the season is longer, the Press are more intrusive, and he sees less camaraderie within both the teams and the peloton as a whole.

That last part really struck me as Kelly is almost always portrayed as a man apart. A singular force of nature who ripped through bleak days and rough roads as though riding in a bubble of his own legend. Of all the riders of the period Kelly stands conspicuously alone in cycling culture. Others, such as Hinault, Fignon and LeMond, are intertwined with each other to a much greater degree. Even Roche occupies an entirely different space from his countryman and sometime teammate, and is defined as much by Delgado as by himself. In popular conception Kelly is simply defined by Kelly. There is no yardstick nemesis, no supporting lieutenant, no equal measure other than his own palmares. He is measured by the hardship of the course, of the fierceness of the descent or by the grimness of the weather. And yet here he is speaking of team mates and friends, of rivals and enemies, and casting himself deep into their stories and they into his. Of the camaraderie of the peloton. Van der Poel, Argentin, Alcala, Theunisse, Anderson. It’s a refreshingly obvious perspective, which the book also tackles head-on, but which the firsthand telling makes much more explicit. Kelly was a racer and by definition those who he beat, and who beat him, and those helped him win, deserve their rightful place in his stories.

At last the questions were closed and the owner of Cadence stepped in to confirm arrangements for the book signings and photographs. Kelly’s relief was palpable but no-one felt short-changed. The owner had been a bit quick off the mark with his organisational remarks and there had been no round of applause yet. It looked for a moment as though Kelly might not get one. Thankfully, just as some were rising to leave, a person at the back put his hands together and the moment was rescued. The applause was long and generous.

Sean Kelly stayed and signed over 120 books. I was one of the last and he signed it as carefully and methodically as the first. No dashed-off scrawl of a celebrity signature here; each was intricately formed and executed with more craft than panache – with a clear pause for composure between the dedication and the signature. Sean Kelly; a proper professional in everything it seems – even book signing. Given the strength of the writing and the appeal of the story, it’s likely he will be signing a lot more in the coming year.