Olly Stevens is standing in a freezing building site, watching his dream slowly come to life. Off to one side, beyond the usual jumble of site lights, half-filled buckets and strip-out detritus, Juan Antonio Flecha’s 2010 Paris-Roubaix Pinarello frameset hangs rather forlornly on an unfinished wall. Aside from that, and a small poster in the window of what was once Tunbridge Wells’ branch of the National Westminster Bank, there are as yet no other physical clues about what he is creating here. For now it is still all in Olly’s head and on the blueprint drawings taped to the walls. He politely asks the builders to give us a few minutes quiet so we can talk normally instead of having to shout over the noise of the machines working on buffing up the mosaic floor that was revealed during the strip-out in December and which Olly decided to keep.

“The cafe servery will be over here, with the kitchen beyond. There’ll be big communal tables down the middle. The stairs will be over there – where they were originally before the bank took them out – going up to our shop space above. The workshop will be through there, behind the new stairs. Outside, we’ll have seating in what was the carpark and secure bike-parking in the enclosed courtyard at the back..”

Olly showing us around the shop space on the first floor

Olly’s enthusiam does a great job of warming the cold space. He left his job at IG Markets 15 months ago to work on the VeloHouse project full-time and now, in the final stages of the long haul of getting backing, finding a suitable space and getting the layout sorted, he shows few signs of flagging. He has a small office up on the top floor of the large building and is onsite with the builders everyday; making schedules, meeting providers, solving problems. Despite looking to take on a number of employees, his will be a very visible face in what he hopes will be a cycle place with a difference.

“We’ll have the normal things; bike locks to borrow, coffee and carb-loaded cake, but we also want to offer something more. So, for instance, we’re also looking at a totally separate, gluten-free kitchen in the basement; at giving people a choice of beans for their coffee; providing CCTV so you can see your bike in the bike park from inside; and putting on regular evening events so that it feels more like a venue rather than just a cafe or a shop. We want to make somewhere that cyclists and non-cyclists can both enjoy.”

Olly’s enthusiasm has been key to getting the project realised.

Olly’s previous job was working in the marketing and sponsorship divisions of IG Markets, the financial spread-betting company who have supported Team Sky as well as Pro-Continental teams in the past.  He has been involved with Sky, Rapha, The London Nocturne and the Tour of Britain. This closeness with the top end of the pro-cycling business gave him a valuable head-start with contacts but it’s clearly Olly’s passion for what he is doing that is making all this happen. I met Olly by chance at a bike show before Christmas and within a few minutes had thought, ‘Here is a man who knows exactly what he wants to achieve’. Getting back in contact and following the final few months of his journey felt like a good way to explore the hurdles involved with making a dream come true.

I’m sure that more than one of us have thought about chucking it all in and living our dream. For many of you reading here that might well involve turning our cycling hobby into a full-time gig. Some dare to dream. Even fewer dare to act, putting livelihoods and families on the line to pursue something that is just an idea, a name, a vague possibility.

Back at the site, Olly is still in full flow, giving the pitch that he must have made quite a few times over the past year. However many times he has had to say it, it doesn’t seem to be getting stale. He has been on  bike mechanic and fitting courses so that he can be at the heart of his business whilst relying on experienced mechanics and fitters to provide the highest level of service in each area. He is also investing in the state-of-the-art Shimano Dynamics Lab fitting system which can automatically provide ‘on the fly’ fitting adjustments and real-time feedback during a session.

We chat for a while longer before moving upstairs to look at the rest of the space. As we move on the builders return from their short break and resume their laborious work on the floor. Down here at least, things look a long way off completion but with a soft-opening aimed for the later Spring Classics and a full opening to coincide with Paris-Roubaix, Olly and his team still have time. They seem to understand the importance of getting it right.

IG Markets pulled out of cycling at the end of 2013 and, perhaps knowing the writing was on the wall in terms of working with the sport he loves, Olly jumped ship after 13 years with the company (including 3 years in Australia) in order to start his own project.  “I just wanted to create the bike shop I always wanted to go to”, he says quite simply. The Tunbridge Wells venue is seen as the first of a few VeloHouses, probably located around London, that will inevitably serve as informal clubhouses for the many groups of riders who ride in the area each week. Maps of the local area on the tables will help both route-planning during the pre-ride coffee and the re-telling of stories over post-ride beers.. 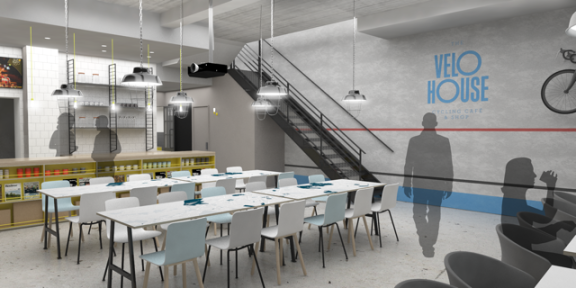 Upstairs we look at the large shop and display space. VeloHouse will stock a  tailored range of bikes and equipment from higher end brands including Lightweight, Kinesis, Rolo and Ritte; all of whom have high quality paired with a distinct graphic style in tune with the modern aesthetic the VeloHouse is adopting. The clothing offer will be initially by renowned kit supplier Castelli, the excellent Cafe du Cycliste and Scottish brand Endura, who now make the World Tour team kit for Movistar and co-sponsor the NetApp-Endura team. The temporary office on the top floor will become the bike fitting room.

Up on the top floor the finishing touches are also being done to a large room where Olly’s wife Sophie will run her interior design business from. It’s the only room in the building where the heating is already working and we hang out there for awhile to warm up. Sophie has been leading on the interior design of the club, aided by her sister Emma Young of Kiwi & Pom who have provided some commercial experience to what is beginning to look like a big family affair. Olly is by no means the only keen cyclist in the family; Sophie rides with a Rapha women’s group and both are keen to pass on the cycling bug to their children.

As we return to ground floor I ask about Flecha’s frameset. What is it doing hanging on the wall of the unfinished building site? After all, it was the one that the Spaniard rode to 3rd place in the race that year. Olly explains that he owns the frame and that it is up in the club space for a recent photoshoot. He shows me a wicked looking crack in the top tube and confirms that that bike is no longer ridable. “A taxi-driver pulled out of a side road and didn’t see me.” he says. “He was actually really nice about it, was very keen to make sure I was OK and he had contacted his insurance within 24 hours.” It’s replacement, a ex-Chris Froome Pinarello Dogma, which the Tour winner rode in the early season races of 2011, resides in the considerable safety of the old bank vault in the basement. The cracked frame will form part of the club collection of memorabilia, which will adorn the walls and less used spaces. 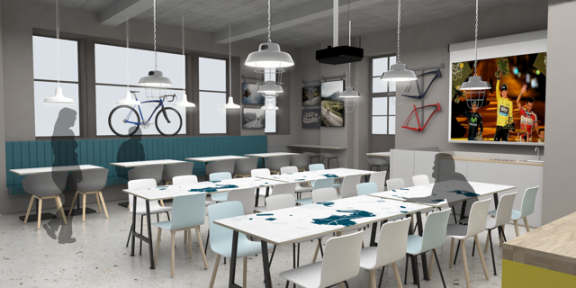 So, what makes a good cycle club/cafe/shop? Rapha’s clubs do not have the bike shop side and Cadence Performance in Crystal Palace lacks a bit of soul. LookMumNoHands in Clerkenwell and Lock 7 in London Fields are rougher around the edges than the feel that The Velohouse is aiming for and probably a bit less suited to the Tunbridge Wells crowd. Olly has also looked further afield at cycle clubs in Berlin and Australia in trying to hone his idea of what it should be.

The Velohouse is making an unusual statement of intent by putting the selling space on the upper floor and dedicating the lower area to the cafe. Most combined cycle shop/cafe/clubs feel the need to have their merchandise on display to all passing trade to promote cross sales but the Velohouse is conceived differently to the places mentioned above. It’s interesting to learn that, before finding the current site, Olly looked at a lot of ex-pub spaces. He clearly believes that the social aspect of the club is it’s main function and is confident that there will be enough specific interest for the shop and the cycle fitting to mean that it doesn’t need to shown to everyone as soon as they enter. It’s a fairly bold move and one that will need to tread the line between regular customers feeling as though the space belongs to them – much like a pub does – and maintaining the feeling of freedom such as found in more traditional cafe’s and shops.

In Part 2 (Read it here now) – we will check on progress, find out about the trials and tribulations of setting the project in motion, and see if Olly is still going full gas.

The VeloHouse will be opening in April 2014 at 5 St Johns Rd, Tunbridge Wells. | twitter: @thevelohouse