Two small (but perfectly formed) exhibitions are on in East London until the end of the month. Both are worth a visit. If I may be so bold as to suggest an itinerary you might chose to visit the first one, Emily Maye‘s photographic exhibition ‘We were Fought by Men Very Fast’, earlier in the day than the display of Massif Central’s incredibly beautiful cycling data posters. A lunchtime visit to Beach London on Cheshire Street would allow a quick stop-off for a salt beef Brick Lane beigel whilst an after-work detour to The Things We Love on Hoxton Street will allow a drink at the small bar at the back of the space. 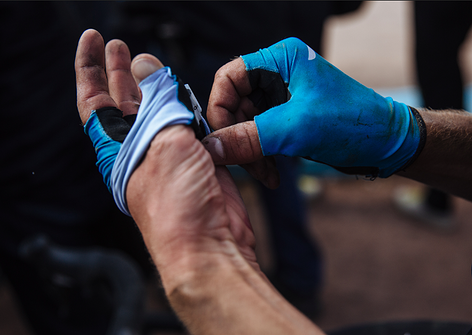 Emily Maye is well known for her cycling photography and has worked with Rapha (who are supporting her solo show at Beach) and is currently embedded with Trek Factory Racing for the 2014 season. The curious title of the exhibition of prints from the cobbled classics season is taken from a poem by  Charles Pelkey, AKA “Live Update Guy”, who himself found it amongst a variety similarly enigmatic statements in the press-releases from non-English speaking teams in the 2010 Tour de France. It sums up the timelessness and otherworldly atmosphere that the Cobbled Classics cast over the otherwise straightforward act of bike-racing.

Maye’s photographs encompass the riders, routes and fans of the pavé in equal measure but all are stolen moments which really catch the eye. An unknown Team Sky rider takes off his vivid blue gloves; a man glances at the camera smoking a cigarette whilst a TV helicopter passes far behind; the top of an almost unrecognisble Thor Hushovd’s head slumps in the Roubaix showers, his hidden eyes contemplating on the enormous blisters on his hands. Strangely , it is the silence of the photographs on display that I found most powerful. The absence of the noise that comes at the Classics is more apparent in these shots than any others I can bring to mind. You can almost hear it.. but not quite. I think it’s a testament to the atmosphere that Emily has captured that this élément manquant becomes noticable.

The prints are very well priced at around £60 (£100 framed) and won’t be in Beach’s online shop for awhile so best to head down there if you can. 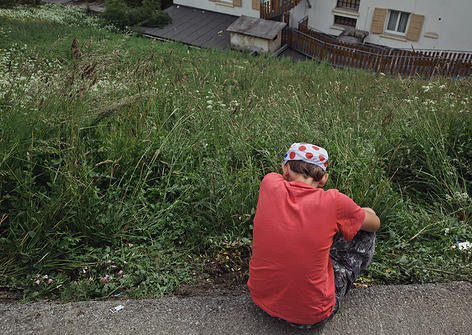 Over in Hoxton Massif Central are taking a different approach to documenting epic rides. Self-confessed ‘data geeks’, they are taking the vital statistics of Grand Tours and other cycle journeys and applying an ‘Information Is Beautiful’ treatment which turning that raw data into graphically stark but stunningly detailed artworks. They work wonderfully well on both the macro and micro level: across a room they have a bold simplicity that works at distance but which inevitably draws you in to discover the treasures hidden in the delicate, microscopically detailed ‘layers’ that surround the central motif – itself an extrapolated profile of the ride in question. Massif Central founder James Mason explained some of the thinking to me at the opening of this exhibition earlier this week. 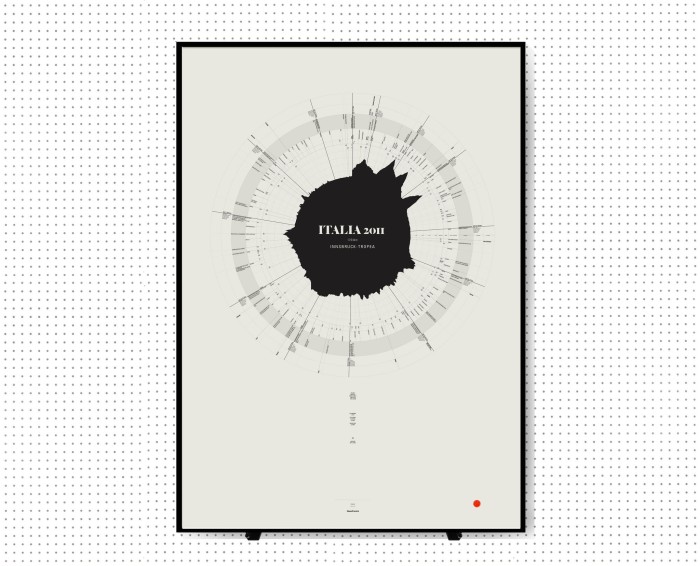 “It started with a ride that four friends and I did in 2011. We did 1764 km over 15 days from Innsbruck in Austria to Tropea down  in the ‘toe’ of Italy. I wanted to create a graphic document of the ride so we took all the ‘data’ – maps, journals, photos, memories, everything – and looked for ways to distil it into one thing. It’s really just a question of layers. They radiate out from the centre and each maps a different aspect of the ride.” In the “A Ride to Remember” piece that he’s referring to, the pure information of mileage, time and altitude is married with references to an accompanying photo booklet, subjective marks out out ten for how one rider was feeling and ‘memorable moments’ which include being ‘chased by a mad woman’. It’s this extra level that could really mark Massif Central out as a purveyor of sophisticated, elegant, personal ride mementoes.

I was intrigued about how they would look to extract the level of personal experience detail that is required to produce such a richness and was impressed with the straightforward answer. “We are looking at producing a Massif Central journal, which would help prompt riders record this extra moments that become important after the fact but basically we’ll just talk to people if necessary. We can work with GPX data and the like but we can also sit and talk and then research back from maps and memories if needed.” And what sort of rides work best? “Getting the scale of the central profile right is quite tricky,” says James, “It’s funny but too many mountains and it doesn’t look quite so good. A longer journey – a week or more – and more varied terrain works best.”

And if you’ve not yet managed a mega cycle-tour but just fancy a seriously cool, seriously clever piece of cycling art? Massif have thought of that too and have been refining their processes by doing record prints of the 2013 Tour and a fetchingly pale pink backgrounded interpretation of the 2014 Giro. Limited editions of the Tour print are available online at £195, with the Giro to follow shortly. Get ’em whilst they are still there… 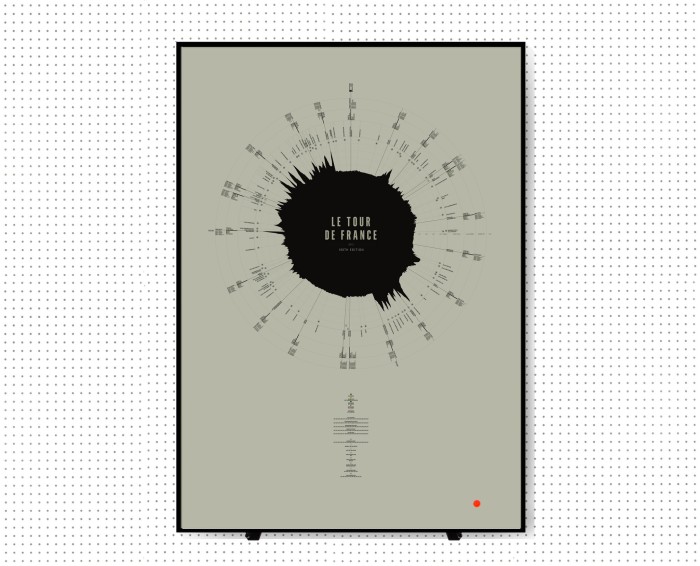