On the face of it ‘Reinventing the Wheel’ is the paradigm of a redundant endeavour. Taking a three-thousand year old invention – arguably the most important invention in the entire history of mankind’s development – and making it anew  would be incredibly difficult to be novel or to be seen as worthwhile. But those particular facts haven’t deterred Sam Pearce from having a go, nor from using the famous saying in the marketing for his company Loopwheels. He acknowledges that the phrase is a bit of a joke but he is deadly serious about his new tangential suspension wheels and the benefits that they can bring.

Back in June, the company gave me a Loopwheeled Dahon to test for a week and to ride in the Nocturne Folding Bike Race. Commuting daily in and out of London and then subjecting the wheels to some real race action was a proper test of ride, handling and durability. Sam and his son Robbie acted as my pit crew for the race so I also got the chance to talk with him directly about the history and development of Loopwheels.

Like all good things, it is a genuinely simple idea which has been elegantly engineered. A wheel with suspension that works in all directions. Sam, a mechanical engineer and industrial designer from Nottinghamshire, first considered the idea back in 2007, but it wasn’t until 2009 that he began to look into it seriously. The blurb on their website best covers this early period:

“In 2007 my idea of a wheel with tangential suspension was born when I was sitting at Eindhoven airport waiting for a flight.  I saw a mother pushing her child in a buggy. The front wheels hit a slight kerb and the child jolted forward because of the impact.  I asked myself why a wheel couldn’t have suspension inside it, so it would soften an impact from any direction.  I sketched the idea in my notebook, got on my flight, and didn’t think much more about it for a couple of years. In 2009 I was doing a lot of mountain biking. I remembered my idea of a wheel with suspension and thought it would be awesome to have that kind of cushioning in a bicycle wheel. One Sunday afternoon I made a small model. That proved the concept, so I made some prototypes. They worked OK, but those early prototypes didn’t really perform better than a spoked wheel. I knew that to be worth doing, this wheel has to be better than what’s already available.  It took many more attempts, and many more prototype wheels, to get to that point. I needed to make my springs from a material that was stiff yet flexible. Steel springs were no good.”

I met Sam, and his wife Gemma (who works as communications, business strategy, marketing, administration and general manager for the company that they set up to develop and sell the idea) at the Bespoked Bike show earlier this year and was intrigued by the idea that a small company was challenging the accepted thinking that the large global bike companies do not appear to be tackling. Along with their production manager Graeme Sharrocks, Sam and Gemma are enormously proud that their wheels are designed, manufactured and assembled here in England. In fact ‘local expertise’ has been an integral part of the Loopwheel revolution and is a little bit more local than you would normally expect, as Sam explains.

“At the end of my street is an archery shop – I live in the area that was once Sherwood Forest, the home of Robin Hood. One day I had the idea that carbon composite archery bows probably went through similar kinds of stresses as the springs in my wheels.” Working in tandem with master bow-maker Keith Gascoigne of KG Archery, Sam developed the carbon fibre springs he needed for his wheels and in 2013 launched a Kickstarter campaign to get production rolling.

“We had spent a long time talking to other people about investing,” Sam told me as we shared a pint in the wake of my less than thrilling assault on the Folding Bike race. ” We were taking the prototypes to show them, talking about applications etc. This is what I’ve done before with my ideas – like the folding stroller I designed. That went to Quinny. I’ve taken them so far and then sold the idea to a bigger concern. But this time, the more we thought about it, the more we realised that we wanted to do this one ourselves.. Kickstarter allowed that.”

My first impressions of the wheels was the same as many people – “Those look different, what are they?” The striking teal blue of some of the carbon-fibre springed wheelsets jump out and demand to be looked at. In fact you could almost see a viable market for different coloured versions even if they didn’t perform better than spoked wheels. But that would be to ignore the fundamental premise of Loopwheels and to designate them as a fashion accessory would be doing a serious disservice to the very noticable benefits that they do offer. Three curves strips of carbon fibre composite are secured around a special hub and fixed to a standard un-drilled rim. The material composition provides the required strength – not too stiff, not too soft. The elegant overlapping springs appear to form a continuous line within the wheel, rather like the trail of an aircraft looping the loop; hence the name.

Looking good is great but as far as Sam is concerned it’s also all about the ride. The three open-coil springs can compress in any direction around the circumference of the wheel, evening out bumps and lumps in the road as well as giving a pleasingly comfortable ride. Locating the springs in the wheels also means that you can have a stiff frame and not have to put up with the lurching ‘dip and throw’ of suspension fork and rear ends. It’s a question of increments. The tangential suspension takes up and smoothes off the bumps in stages as the wheel rotates over them. Once you find the ‘sweet spot’ on the bike for your weight distribution – a touch further forward than usual – you can really hammer it and the wheels just feather away underneath you. It’s a lovely feeling. I tested them up and down hill and even across some urban pave, where the ride was still excellent, prompting a discussion between Sam and myself about a Loopwheeled entry to the Ronde Van Vlaanderen next year.

Loopwheels currently make 20″ wheels that fit folding bikes such as the Dahon Vitesse and Mu Uno. The tighter frames used by Brompton have so far proved too small to get a Loopwheel into but this is not for a lack of wanting to on Loopwheels part. “The smaller 16″ wheels on the Brompton is not an issue.” Gemma explains, “We have done that. But we need 3-5cm clearance between the wheel and the frame because of the suspension and Brompton frames are really tight. Without a re-design of the Brompton it’s not something we can look at in the foreseeable future, which is a shame because we would absolutely love to see Loopwheels on Bromptons. They fold brilliantly and are really great bikes.” 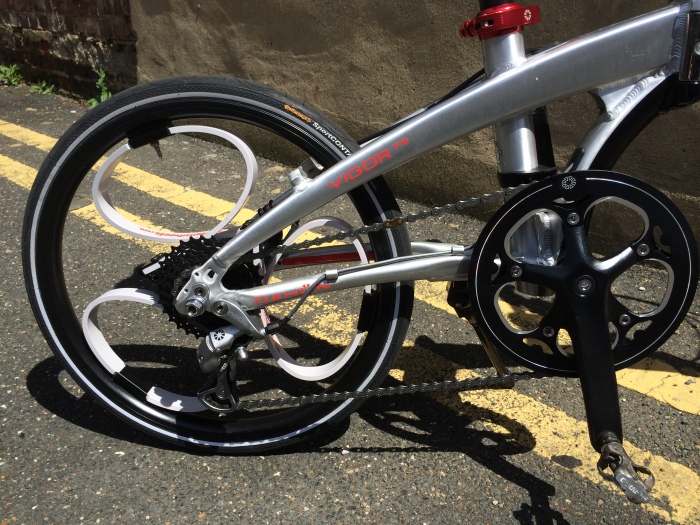 For the moment Sam is concentrating on up-sizing the concept to work in his beloved mountain bike and also for wheelchairs – where he sees enormous potential for users. “Big wheels are the real prize.” confirms Gemma, “Getting the same or better suspension performance as in the smaller wheels would be a game-changer.” For Sam the issue goes back to a technical one. “I’m trialling a 26″ mountain bike wheel right now”, he says, showing me some photos on his phone. “The front wheel is the hardest one. If we can contain the deflection in the front, the rear wheel is no problem. It just follows along and isn’t subjected to such a wide range of forces. With the wheelchairs, it was something that people had come to Loopwheels asking for and so far testing has had ‘really good feedback. We are really excited about this because it will make a real difference to people’s lives.”

Paired with the Dahon, the wheels performed admirably and, as they use traditional rims, there is no affect on braking options or tyre changing ability and it’s easy to see the appeal of them to a large cross-section of people. Obviously Loopwheels see the main UK market as being people who are looking for a little more comfort in their commute. “We would love to see more people riding to work in the UK and just using their bikes more. But we also see a big market in the Far East where small wheeled bikes are much more normal. We are speaking with distributors in South Korea and Japan. It’s an exciting time for us.”

As you would expect from a high quality, novel, British-made concept Loopwheels aren’t cheap. At around £659 for a 3 speed pair and £719 for a derailleur pair, they almost double the cost of a standard Dahon if bought as a full bike, and you’ll need to factor in a new, wider fork if you want to upgrade your existing bike with a new wheelset. Prices are sure to fall as the concept gains traction and production ramps up but for now it will be the savvy early adopters who want a technologically innovative, aesthetically individual solution to dealing with kerbs, potholes and speed-bumps that will be knocking on Loopwheels’ door.

Loopwheels can be bought individually or as pairs in 3-speed and derailleur options. Loopwheels also offer fully finished Dahons as complete bikes.

One thought on “Reinventing the Wheel – Loopwheels”