Being a cycling writer has a few perks but, for me at least, none are quite so fine as the unheralded arrival of a new book to review (although I am open to bigger and better options). The double surprise elements of first the arrival of the package itself and then of the content found therein makes each fresh delivery like a present for an overlooked birthday. And when the ‘present’ is something beautiful, or thought-provoking, or revealing, the feeling of being treated is multiplied exponentially. The arrival of Brett and Shelley Horton’s ‘Goggles & Dust’ was one of the those extra special days when all three boxes are ticked. Beautiful? Check. Thought-Provoking? Check. Revealing? Check. 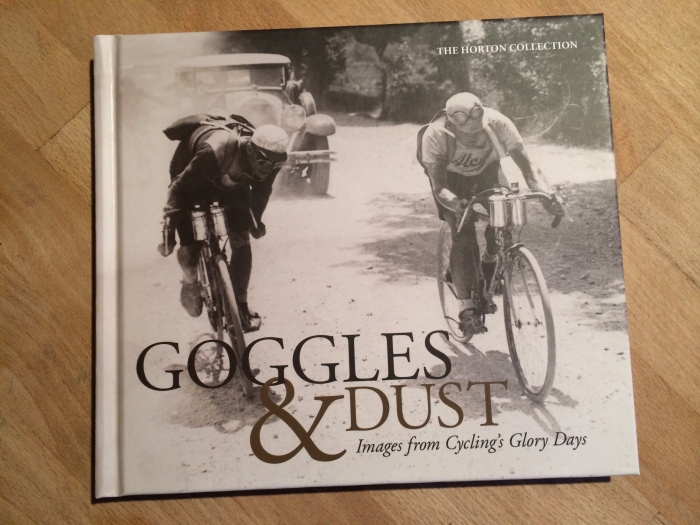 The Horton’s didn’t set out to specifically collect photographs of cycling’s so-called Glory Days. Their collections lay in the areas of jerseys and accessories but they found themselves increasingly relying on photos to help authenticate their items. So they began to pick up small photographic collections at flea markets, auctions and then some larger ones from defunct publications. It was something of a shock to them when they recently got around to cataloguing the photos and found that they had amassed over 350,000 images.

A mere one hundred of those beautiful images – all black and white from the Inter-War years – are collected in their new  book ‘Goggles & Dust’ (VeloPress RRP £11.99) but it is still more than enough to open the eyes to the rigours of road cycling during that era. The rickety-looking fixed geared bikes, the saggy woollen clothing, the goggles to protect the riders’ eyes from the ever-present dust of unsurfaced roads. These are the well understood trials of the early coureurs but here we also see the simple shared meals, the rudimentary aid for crash victims and, above all, the lines of the hardships of the road etched deeply on the faces of the winners and losers alike. ‘Giants of the Road’ they called them and it becomes apparent why. These creatures, barely human in some pictures, all too human in others, exist as part of the road itself. They bow to its whims, suffer against its hardships and emerge, not as victors or vanquishers of it, but as equals to it. Survivors of the road..

The names conjure similarly evocative thoughts but here they are, in the flesh, in mostly previously unseen images. Bottechia, Buysse, LeDucq, Magne, Vietto, Lapébie, Egg, Pélissier and the occasional ‘Rider Unknown’, resolutely plying their trade. And for most it was a trade with all the attendant lack of wealth and comfort which that entails. A Hollywood style studio portrait of Pélissier – complete with Valentino-esque eyeliner and liberal retouching – seems hugely out of place amongst the mud, blood and tyre changes found elsewhere in the book but its inclusion acknowledges that these men were huge sporting heroes of their day. 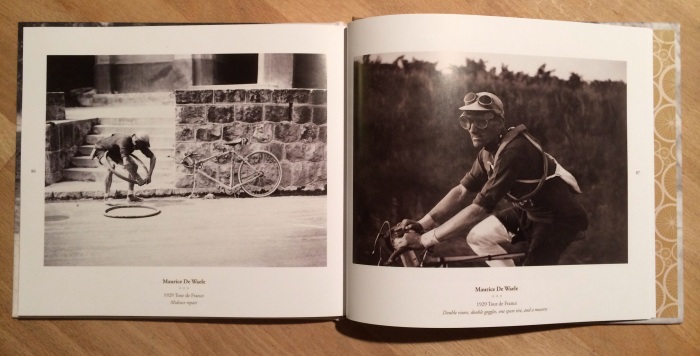 It’s not all pain and suffering though. Lighter moments are included as well; a joke between Leducq and Nicolas Frantz in the peloton, Tour winner Lapébie reunited with his wife and child after the rigours of the road, champagne for Buysse. What strikes most is the individualism of the riders. Though teams were prevalent from the earliest days, – the first picture in the book is of a team time trail – each man here seems to stand alone – making their triumphs and disasters all the more potent.

Reasonably priced and sized at around two-thirds of a piece of A4 paper, ‘Goggles & Dust’ is just the sort of book that would be an excellent addition to any cycling fans Christmas stocking and would provide a wonderful couple of hours diversion. Just choose a moment when it’s quiet and this will enrich your cycling life. We look forward to more gems from the Horton Collection.