You would think that it would be quite disconcerting to read another man’s intimacies with an alluring mistress for whom you have had a long-term (occasionally unhealthy) and, as-yet, unconsummated love for, but that is exactly the position I find myself in when reading Ned Boulting’s latest musings about the Tour de France. (101 Damnations, Yellow Jersey Press. RRP £14.99) Yet, oddly enough, it’s not the off-putting experience that it should be. Instead I find myself revelling in the stories of the sordid secrets, romantic interludes, domestic spats and all the very dirty laundry that make up their annual month-long trysts. I know that I want to be in Ned’s shoes, getting as close as he does to this most seductive of sporting sirens, but as far as living out fantasies through other people go, this is a pretty good substitute.

To say that Ned Boulting is in love with both cycling in general and with the Tour de France in particular is not an understatement. As he expressed it himself recently, “The day when I have to stay at home in July will be devastating..” I had the chance to ask him a few questions about his writing after a recent speaking event and I got a new perspective on his two-wheeled paramour. First of all though I had to hear how he fell in love with my July mistress as well. It was not the slow, creeping sort of love that causes two platonic friends to look at each other anew after an apparently innocent goodnight kiss suddenly imparts a new sexual frisson. Nor was it the kind of love long-born from a mutual meeting of respect and idealisms. No, this was a Friday night, lust-at-first sight affair that began with a bang; with torn undergarments and a young man left breathlessly wanting more. On Stage 1 of the 2003 Tour – the first bike race of any kind that he had ever been to – it took just one glimpse of some Tour de France buttocks and our Ned was ensnared for life. The fact that the torn undergarments and (very grazed) buttocks belonged to Jimmy Caspar, who fell in a nasty last kilometre crash that day, matters not. Ned simply couldn’t believe that the Tour would put human beings through such things day after day after day after day. He was hooked. Having fell in love in a similar fashion some twenty-five years ago, (for me the pinpoint of wonder was Laurent Fignon’s fetching ponytail rather than Jimmy Caspar’s road-rashed arse – but each to his own I guess ) I knew exactly how he felt.

Eleven years later the Tour still has it’s very considerable hooks in Ned’s emotional and physical flesh and he has made a career of talking about it on ITV’s daily live and recorded shows. He is the man at the coal-face; jostling amongst the other world and European TV journalists for a word from the winner or a scowl from the loser. It’s a hard job but one which has become a little easier with age as his stock has risen in tandem with that of the British riders in the peloton. But even with two daily shows, Ned reckons that he only gets about twenty seconds of talking-time. Sixty words if he is lucky. He works hard at those sixty words but it’s never enough. And, just like the guy with the most beautiful girl in the room, he doesn’t want to stop talking about her.

So my first question is how does he see the books himself. What are they? “It’s my great release, my great safety valve..” he answers somewhat enigmatically before explaining some more, “If it was just the TV stuff, I think I’d go mad. There is so much stuff that we have to leave on the cutting room floor. The parts you see on TV are just the tip of a massive iceberg and there is so much more in the Tour. So knowing that all this stuff that I have witnessed, all this madness, I’ve got a place for that to go out.. That’s great.”

Safety Valve.. Literary release.. Something of a diary then? I hold back from asking if they are “Love Letters” at this stage. “The 101 Damnations book is roughly chronological so it does have elements of a diary feel about it but I’ve also allowed myself to go off on massive tangents every now and again..That’s been a huge pleasure and it’s not something I can do on the broadcast.”

Ned isn’t adverse to putting himself into the action either. And if I’d spent a month being shoved, pushed, barged, elbowed, trodden on, and occasionally driven over (!) I think I’d want to mention myself in dispatches too. “I’ve always been drawn to the (good) gonzo journalists.” he explains “The best writers take you by the hand, lead you into an unexpected room where interesting things are happening, and point out the best bits.” But that’s “my Tour de France’s best bits you are pointing at whilst interesting things are happening to them” I find myself thinking (as I wipe away the lonely tear of the jilted lover) and silently nod in agreement. Realistically though, I know that would be doing exactly the same pointing. 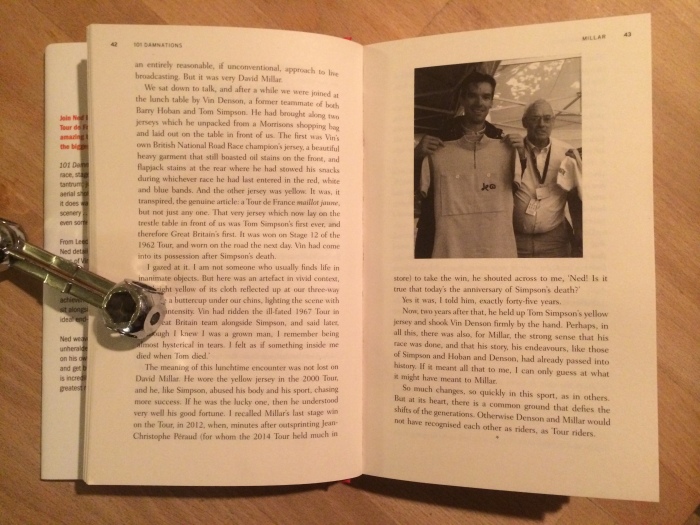 Living the Tour, or with the Tour at least, is a privilege that few of us will know and the journalists who do it are, in my experience, always keen to stress the downsides. The long hours, the separation from home, the disorientation and bad food are just the tart of it. The endless driving and endless quest for clean clothes usually make up the rest. Ned is no different. It’s part and parcel of covering an event that covers 3,500km across an area of at least 640,000 square km. The difference with Ned is that he makes those bits as much of an asset as the history-making, cast in stone, SPOTY-winning pieces as well.. He knows the value of balance. He also knows that the Tour is a high-maintenance partner. “It’s 21 days of insanity,” he confides. “Each time I go I say, ‘I’m never doing that again’ and then something happens to change my mind. Being able to be with Brad, for example, in his £50-a-night Campanile hotel room in some industrial estate, after he had secured the 2012 win in the final time-trial at Chartres.. If someone had said that was the end of my journalistic career, I would have taken that..” But then he can counter that with tales of continental breakfasts taken in places where, to be honest, he has not known which country he is in; of interviews where none of the three or more parties involved share a common language, or indeed where the mind is no longer willing and the body gave up several stages ago.. It’s a love affair of attrition. As he says, “If you can make it back for a second year, you’ll be there forever..”

And the writing? How does that expand on the experience of being there? “I enjoy writing, crafting a sentence, turning a phrase, and where else would I be able to drone for half an hour about a French rider from the 1960’s, [Roger Riviere] who rode one Tour, fell off a mountain and lost the use of his legs.. He’s a fascinating character.. So I need the writing to let the stories escape..” I feel a little emboldened; that we are connecting on some trivial level and I venture the main point.. Are they Love Letters? “Yes. Absolutely. It’s not sophistry or pretension [He did say he could craft a sentence]. It’s a fact.”  And there it is – we are – along with countless others of course – in love with same beguiling mistress. Strangely this feels almost fraternal instead of adversarial. Let’s face it, neither of us are alone in our affection.

The more I think about it though, (and I assure you this is not sour grapes) the less I want to stand in Ned’s shoes each July. For a start I get wildly car-sick, which pretty much rules me out of ever getting up close and personal with more than a single stage of the Tour de France, and also I quite like actually watching the action – which by all accounts is best viewed on the telly and not on the ground. In a similar way I understand that I enjoy ‘Fear and Loathing In Las Vegas‘ (and in the spirit of sharing would admit that I there asked a girl who I was deeply enamoured of to marry me – ‘Not Yet..’ she said in the most tantalising, possibility-encouraging way.. Fifteen years later I realise that it was kind of a one-way deal..) but I know that doing what Hunter S. Thompson did would have killed me long before I could put pen to paper to share it.. I think the same of Ned. It would have killed me. Every year would have killed me. I therefore doff my cap to the better man and will continue to admire both his work and the charms of his mistress from afar..

I read this book a month ago and for a long while couldn’t work out why I liked it so much. After talking with Ned, and reflecting a little, the answer is clear. I am as much in love with cycling and the Tour as he is. Of course I’m going to find resonance in his feelings. For they are my own too. And if you have ever cared about anything more than who finally won the ‘yellow jumper’ on the Champs Elysée, I assure you that you will too.