It is said that when Norwegian wunderkind Edvald Boassen-Hagen first broke through into the pro ranks he didn’t know the name of the cycling demi-god to whom he was initially compared to. His lack of knowledge about the history of the sport raised a few eyebrows at the time and is occasionally brought up again now as a contributing factor in his later inability to more closely emulate the man he didn’t know. I also suffered from such ignorance at one time, though I think that being only thirteen and not a professional cyclist does go in my favour a little.

One summer in the late 1980’s, my older brother and I had somehow acquired a very beaten-up old frame – from one of our regular trips to a local junkyard I assume – and, having hauled it back to our mother’s garage, were trying to work something out. The previous owner had, rather ham-fistedly, added a marquee to the downtube using black electrical tape and we were trying to decipher the ragged remains. The first name was clear enough: EDDY, but the surname was far more puzzling. An M for certain, maybe an E, an R, a gap where a letter had disappeared completely, then something that could have been a F, H or possibly a K, and finally what looked like half an X but which must surely be a misshapen Y. It didn’t take us long to reckon we had worked it out. Obviously no name could finish with a consonant and an X so we decided that the owner must have tried to ‘rebrand’ his frame with the name of the most famous Eddy on the planet and, maybe being a less competent speller or sign-writer than we felt that we were, had mucked it up. It was clearly a poorly executed attempt at EDDY MERFY, or rather EDDIE MURPHY, and was a tribute to the star of the Beverly Hills Cops movies.. I mean who else could it be?

Even if there had been an English language biography of Eddy Merckx available in my early teenage years I think it’s safe to assume that I wouldn’t have read it and would have still made the same naive mistake. Incredibly, by the time that Daniel Friebe turned his attention and considerable skill to writing Eddy Merckx – The Cannibal (Ebury Press, RRP £8.99) in 2012, there still wasn’t one.

Merckx’s incomparable career has exhausted journalists and writers supplies of superlatives many times over since he burst onto the scene in the mid-Sixties and then proceeded to devour the opposition at every opportunity for a decade. It’s therefore inevitable that a Merckx biography runs the risk of becoming a staid litany recounting his innumerable successes. It’s telling that much of the book dwells on the (firstly false) dawnings of the Belgian’s eventual demise. By 1970 practically all of his opponents had realised that outwaiting The Cannibal’s voracious (and for them hopefully unsustainable) appetite for competition and victory was going to be the only option. The acceptance with which Merckx was deemed unmatchable was swift and, presumably, terrifying for all concerned. The story of how The Ogre of Tervuren eventually fell is even more riveting. 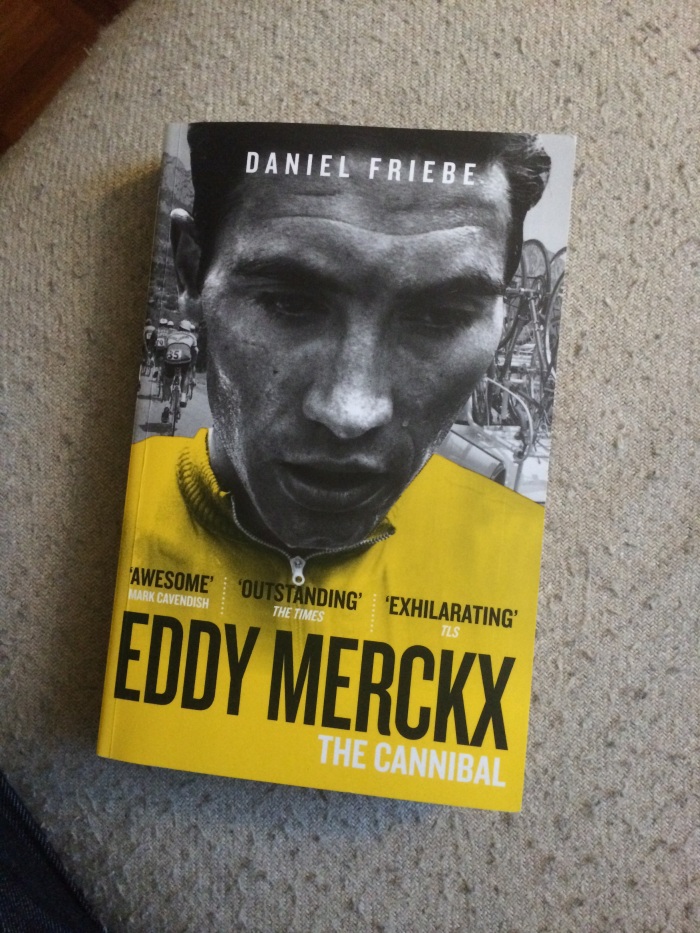 Daniel Friebe is the multi-lingual, European Editor for Pro-Cycling magazine and his ability to craft beautiful prose from myriad sources and languages is as incomparable as Merckx’s ability to craft (or bludgeon) victories across cycling’s vastly differing formats. Friebe’s intimate knowledge of the sport’s history, geography and its cast of characters is a fantastic tool to have but it’s the scenes that he paints, the details that he somehow grasps hold of and brings to the fore at a distance of forty years or more, that really make the book special. Fixating on (and making a useful analogy of) the type of flowers that were in the lobby of Savona hotel on the morning of the lowest ebb of Eddy’s career for example defies not only our understanding about the levels of research required for such a work but also what constitutes important information in a biography. By setting the scenes so dextrously, Friebe does what is so often missed in biographical work; he places us within story and lets us look around.

Throughout the book Friebe’s masterful mise-en-scene is unparalleled. From the opening ‘Prologue’ chapter where we are acquainted with the fear that every rider of the generation felt – the apparently unmistakable churning sound of Merckx approaching from behind – through to the final days of his ‘reign’ we are at the heart of the action. We see what Eddy saw, hear what Eddy heard. We also learn of the inner turmoils of mind and body that troubled La Grand in individual races and stages; of the training sessions and friendships with teammates; and of the ever-present, uncontrollable burning desire to Compete and Win that was never really extinguished despite the seemingly unending success.

I spoke to Daniel recently to ask him about this and also about the linguistic aspects of the book. On the subject of the mise en scene he revealed that it was a mixture of fear and desire that fuelled the depth of detail. “You always look for detail in reportage, and try to latch onto it to give a sense of presence. I was scared that the fifty year gap meant that many recollections were very vague, with just generic statements of what happened – “Merckx attacked. Merckx won.” – so I was looking for anything that wasn’t braodbrush and that really stood out. The gladioli was one of those moments. I spent months going through the old French and Italian newspapers and in those days they sent some really heavyweight writers, people like Dino Buzzati, who wrote for La Stampa, real heavyweight, esoteric writers. Their reports were like feature writing and I found lots of details to use there.  I also remember that with Ocana’s attacks in ’71, I read all the reports and then used maps to work out exactly where each attack was. I wanted to know the specific places to build the pictures. Going the extra mile for this was important to me as I hadn’t really been that interested in the period before doing the book.”

The set-pieces in the book are done equally well. The fateful velodrome crash at Blois in 1969, the epic tussle at the Tour with Ocãna in 1971 and the first thundering defeat to Thévenet in 1975 are rightfully given large portions of the narrative but never at the expense of the smaller details which make the book so enjoyably rich. Each of the many interviewee’s get their own little bit of scene-setting (no Friebe story would be complete without a reference to Roger de Vlaeminck’s llama-guarded back garden) and he is a generous writer when it comes to this army of contributors. Maybe this is because of Merckx’s own direct absence from the book- he was contractually tied to his own auto-biography – but one also senses that this is just Friebe’s style. Unlike Eddy, who famously never gifted anything to a fellow competitor (not even teammates), Friebe seems able to share around his writing talent to the benefit of everyone involved.

Which brought me to the question of translation when doing so. As far as I can tell translation can be as much of an Art as a Science and when using foreign language sources to write a book I wondered how much ‘linguistic licence’ comes into play. “There are different translation techniques,” says Daniel, “and I maybe favour, more than some, putting the emphasis it sounding linguistically OK rather than a 100% straight translation that can often come across sounding clunky, which wasn’t the case in the original. But then you get some writers, like Jacques Goddet or Antoine Blondin – their language is so great that you handle it with care. Lovely delicate writing that translates very well. Similarly some of the interviews were with real characters, Dino Zandigu and Martin Van Den Bossche especially, and again you have to take care of their words [to preserve that]. I had to take care though as the memories were so foggy and sometimes embellished, which only hours of checking would show. It was important to show the differences between fact and memory. The book isn’t a historical fiction but already the subject is a mythology.”

But why a book on Merckx in the first place? Friebe asks himself the question in the text itself and answers with an eloquent frankness that will be familiar to listeners of The Cycling Podcast. Quite simply, the cast of players who rode with, for and against, Merckx are getting older and soon (sadly too soon in the case of Ocaña and Agostinho) they will be gone. Capturing their thoughts and presenting them for an Anglophile audience is suggested as an important task and, when done by Friebe in this wonderful book, it has been artfully accomplished.

One thought on “Eddy Merckx : The Cannibal – Daniel Friebe”