Biblical weather on the commute home yesterday – which was maybe apt for evening before the beginning of Lent – but it really wasn’t a problem. I had read the report in the morning and taken appropriate action.

Appropriate action against a “Heavy Rain” weekday warning from the Met Office takes the usual form for me. Not the “leave the bike in the shed and take the train” kind of form that many fair-weather commuters prefer but more the “boot up and suit up” kind. Overshoes come out of the drawer, mudguards are checked (and in this case a broken one replaced) and I look over the ever-growing collection of rain jackets that hang on the pegs in the porch to make a selection.

Normally, anything more than the lightest dribble of rain has me reaching for the Rapha Rain Jacket. I’m on my second one now and find them to be excellent. They keep you dry on the bike and they don’t flap around. They are however most decidedly ‘racewear’ and aren’t the most suitable thing for walking to the shop at lunchtime or, more crucially for a wet weekday, wearing to a middle of the day business meeting.

If you read my recent review of Huez*’s Starman shorts you’ll know that I keep a set of clothing at work to use in between my commute to and from the studio. This includes a casual jacket that, whilst not exactly a super sharp Tom Ford suit, doesn’t scream “CYCLIST!” at the top of its voice. It sees occasional service when the requirements of the commute doesn’t quite chime with the requirements of the working part of the day. (If you are wondering just how casual – it’s made by Carhartt and it has a hood..)

I’ve worked long(ish) and hard(ish) enough to ensure that I don’t spend my 7.5 hours a day in an industry that requires shirt, tie, shined shoes and pinstripes but equally sometimes you do need something that is a bit less… well.. a  bit less bikey. Having something with front pockets is really useful for those lunchtime wanderings for instance. And, with the obvious exception of our cycling brand clients, I’ve noticed that eyebrows occasionally raise in board meetings if I turn up wearing something that wouldn’t be out of place on the weekend club ride.

As cycle commuting has returned to the popular consciousness, the Holy Grail (to return to the Bible analogy) of cycling apparel has become the do-everything ‘urban performance wear’. Fit for the dual purposes of riding and living it’s a conundrum that has beaten most designers.

Vulpine (the name is derived from the Latin name for fox – Vulpus Vulpus) gave themselves a head start in this game by eschewing the racewear side of things completely (until the recent arrival of the separate HOY Vulpine label) and concentrating on items that look normal off the bike but which perform well on it. It’s not ‘cyclewear’, it’s smart and casual wear that works well on a bike. Their Original Rain Jacket – which was the item I reached for last Friday when the forecast was bad and again yesterday when the forecast was worse – is a brilliant case in point. 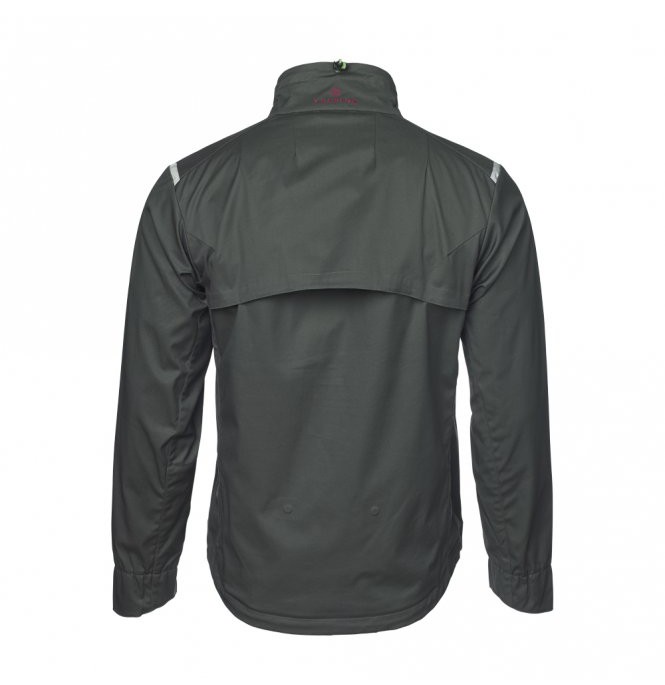 At no time wearing it have I ever thought “I’m wearing a cycling jacket” or had to deal with the small issues which that sometimes presents. But at no time either I have I felt that I was wearing something that was less than entirely suited to the rigours of British winter cycling. Both statements are meant as compliments. Put them together and it becomes a very big compliment.

Made from 98% cotton the Vulpine Original Rain Jacket doesn’t have the flimsiness that most racewear rain jackets require and feels rock solid in poor weather as a result. The cut is excellent so, whilst the heavier than usual cloth doesn’t flap around in the wind, comfort is never an issue either.

As well as being very waterproof – which should be the basic requirement of any rain jacket – the Vulpine one has a number of neat features. Long sleeves with angled cuffs keep wrists and underclothes dry; a storm-proof main zip ensures that the same is true of the front section. A generous, overlapped air vent across the upper back prevents the usual ‘boil-in-the-bag’ problems and there’s a hidden rain flap to keep your butt dry. Not just hidden, the rain flap is fully removable. Perfect for when it’s wet and muddy and you don’t want to tuck it back inside next to your clean (still dry) clothes. Good thinking Vulpine.

The front pockets and the collar have small magnetic discs neatly sewn into the linings allowing easy, unfussy access and closure. These work well in the main though the lack of a confirmatory ‘click’ means I find myself double and triple checking the collar one particularly. The stowing method for the rain flap is similar, allowing instant, stress-free deployment when on the bike.

Vulpine’s colourways engender a fair amount of debate in our house. They like bold takes on green, indigo and beige which won’t be for everyone. I have the charcoal Rain Jacket which I think is the best colour in their range though mine doesn’t have the contrasting red zip of the one currently on sale. Small reflective strips on the shoulders and in the small of the back don’t detract from the overall understated look. The rain flap is bright red – an understandable concession to colour for a section that should only come out when visibility is reduced by rain. I’m fine with that though my kids did christen it the “Baboon Butt” when they saw it. When they realised that they could reveal it without me noticing – those silent magnets remember – it caused much 7 and 8 year old mirth. Thankfully I have the option to remove it fully and pop into one many inside pockets until it is needed.

The Original Rain Jacket perhaps suffers a little by being overshadowed by it’s more famous brother, Vulpine’s Harrington Rain Jacket, but my gripes extend only to the reflective material hidden in those gorgeous cuffs. In order to show the reflective part – which I like to do for my ride home in the dark – you have to roll back the sleeve an inch or so, opening up a gap for rain to get in. Cue damp sleeves underneath. The current detail looks super neat in either mode but something that flapped out would work better by keeping everything dry. As I say, it’s the one part I think where Vulpine have got the difficult balancing act slightly wrong. The rest is impeccable and a it’s huge pleasure to wear – something that helps the mind when the storm clouds are gathering.

Despite the weather being gloriously sunny today I most certainly won’t be giving up this particular treat for Lent.