E3 Harelbeke and Gent-Wevelgem are not the biggest names in the cobbled Classic races that are now pouring forth from the unique topography of north western Europe. In many years these two races pass by with not much more that a obligatory notation of the winner as the collective focus of riders, press and fans look slightly further forward to the back to back weekends of the Ronde Van Vlaanderen and Paris-Roubaix. This year however, events conspired to make us sit up and notice.

The first thing to catch the eye was those who weren’t able to contest the finishes in Belgium. Tom Boonen out with a collarbone broken in Paris-Nice; Bradley Wiggins left off the start sheet for unspecified “selection policy” reasons; and then Fabian Cancellara – Spartacus himself – getting caught up in early crash and abandoning with an injury that would later be confirmed as cracked vertebrae. Like Boonen, he will be kept out of the rest of Spring Classics. After his first non-podium finish in the Monuments since the dawn of time(ish) at Sanremo – it could be the end of a era for the 34 year old Swiss.

A couple of those who were left in the race till the latter stages also made the headlines for the wrong reasons. Local favourite Greg Van Avermaet somersaulted over his handlebars at E3 and was lucky to be able to take the start at Gent-Wevelgem two days later. Sepp Vanmarcke looked immensely strong but a pedal slip at a key moment on the Oude Kwaremont ensured he missed the race-winning move. TeamSky’s Geraint Thomas, ostensibly Wiggins’ lieutenant for these races, forged ahead on the upper slopes and only Etixx-Quickstep’s Zydenek Stybar and then Tinkoff-Saxobank’s Peter Sagan could follow. With 30km still left to run the Slovak, who is just about clinging onto his wünderkind moniker, still looked the hot favourite.

But, as we saw with Ian Stannard’s win at Omloop het Nieuwsblad, TeamSky’s tactical nous in one-day racing seems to have undergone gains that are quite the opposite of being merely ‘marginal’, whilst other teams have gone backwards. We saw it with Etixx in Omloop and, though here Sagan’s downfall had all the hallmarks of hunger knock, you got the sense he has simply run out of ideas about how to get a win. He instantly lost out on first or second place when Thomas accelerated away with 4km to go and Stybar – after a moment’s hesitation – took off in pursuit but to be caught by the pack and finishing in 30th can’t have done anything to please his notoriously demanding employer. Thankfully for Peter, Oleg has had other team personnel in his sights recently and the confirmation of Bjarne Riis’ exit from the team he once owned came as no surprise. 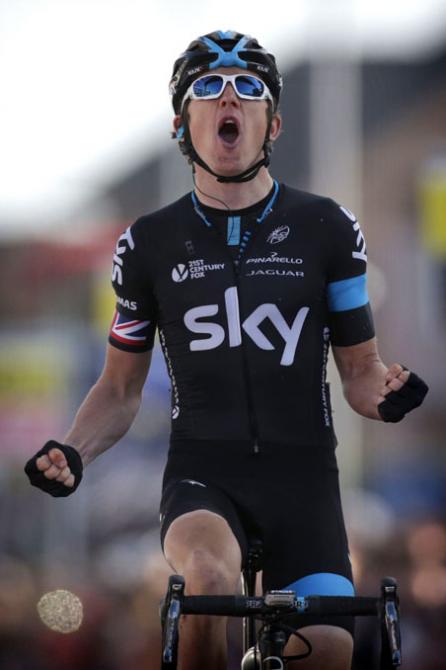 The only question remaining at E3 was whether Geraint Thomas – looking like a chiselled cheekboned cycling God as he powered through the last moments of an immensely enthralling race – would stay upright to the finish. He has an unfortunate reputation for crashing in the Classics but even that supposed curse couldn’t deny him this time around. His win rounded out an incredible day for TeamSky after stage wins and leader’s jersey adoptions by both Ben Swift in Coppi E Bartali and Richie Porte at the Volta A Catalunya. Porte would go on to win the prestigious stage race – which was marred somewhat for the British team by an inexplicable collapse in form from Chris Froome – whilst Swift just lost out on his GC win by 2 seconds on the final stage, both on the same day as Gent-Wevelgem.

Even without the possibility of another Grand Slam day for Sky at Gent-Wevelgem, Wiggins’ early exit from this race too was a slight  – if slightly predictable – setback to their ambitions. The conditions in Belgium were unrelentingly atrocious with rain and incredibly strong wind shattering the peloton from the get-go. Riders were literally off their bikes and into the some of the many ditches that line the route. Vast numbers of echelons formed as bikes were lent hard over just to keep them going forward. Sir Brad was apparently amongst those talking to the commissaire’s about having the race neutralised or possibly even abandoned. In the end he and 159 others DNF’d. The result of the carnage was that the action which would normally be reserved for later in the race was forced to the fore much earlier, and that turned the race into another thriller.

As the battered peloton fought to simply stay on the road Thomas showed that his reserves had not been sapped during his E3 efforts by getting into an incredibly strong group who chased lone leader Lotto-Soudal’s Jurgen Roelandts  for a large portion of the race. Working initially with Roelandts’ teammate Jens Debusschere, Etixx-Quickstep’s Stijn Vandenbergh, BMC’s Daniel Oss and LottoNL-Jumbo’s Sepp Vanmarke, they were joined by Vandenberg’s teammate Niki Terpstra and Katusha’s Luca Paolini with 50km still to go.

Sagan meanwhile was leading the remains of the shredded peloton in club run fashion, again lacking the power or the inclination to follow and contest. With a quarter of the race still to go it was at best an eight man race. 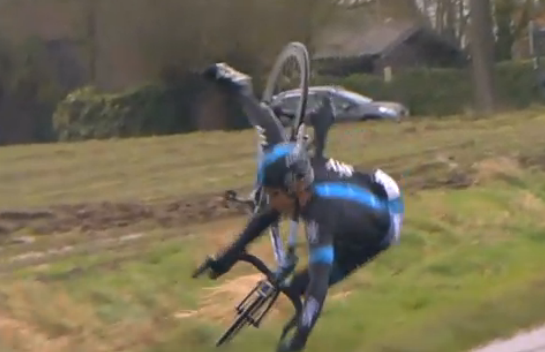 The wind nearly made it seven when Thomas momentarily refound that Curse of the Classics and was whipped off the road and into yet another ditch. It looked like race over for the Welshman but he remounted and caught up quickly. The long range effort by Roelandts was finally mopped up with 15km to go and instantly Niki Terpstra – the defending Paris Roubaix champion – attacked, taking Luca Paolini with him. Thomas and Vandenbergh joined them at 10km and though Vanmarcke and Debusshere were never far off the back, a working over by the two QuickStep’s looked the most likely outcome. In any other year it you would bet your house on it, but in 2015 Etiix-Misstep have snatched defeat from the jaws of victory all too often. And so it was again here.

In the final throes of a scintillating race – which some experienced journalists were calling “the best Gent-Wevelgem” they’ve ever seen – Terpstra and Vandenbergh didn’tt take advantage of their number and the veteran Italian Paolini, who has been putting in monster shifts recently in service of his team leader Alexander Kristoff, seized on the growing indecision of the group and leapt away in an attack that none could resist. Terpstra and Thomas battled to the line for 2nd and 3rd respectively but the 38 year old was not to be denied. “It is the best win of my career” he said in the post-race interviews. “Next week I go back to helping Alexander.” Short of Thomas taking an amazing double, it was the best result. The Welshman will still be enormously satisfied with his long weekend’s work and will be going into the next races with  his confidence Sky-high. 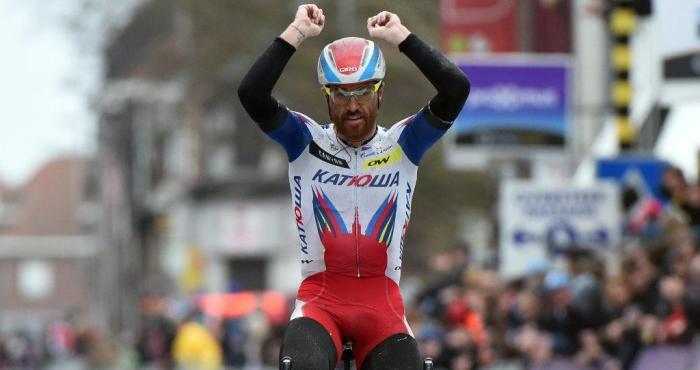 The Spring Classics have already delivered mightily this season. And, with the Tour of Flanders and Paris-Roubaix now fully in our sights, surely things can only get even better.