The excitement levels have been growing all week, with commentators, pundits and fans all counting down the number of sleeps until the Tour de France gets underway. Expectation surrounding the Tour is always high and it’s one of the few things that hasn’t changed… We’ve had to get used to things being different in the Tour de France in the last few years. We’ve had seven different winners in seven years, we’ve had the most northerly and southerly starts and, we are told, we’ve had clean racing that we can all believe in.. Things most certainly ain’t what they used to be.

And now, if you will excuse the strained syntax, the 2015 race looks set to be no different by being different yet again. “The toughest course in years..”; “The most open race in years..”; “The shortest amount of time-trialling in years..”; “The latest team-time-trial..”; “The most previous winners..”. The list goes on on and on. So as the riders start to trying to switch off and get some sleep before the first big day tomorrow – let’s run the rule of the 102nd Grand Boucle and try and makes some sense of stuff. 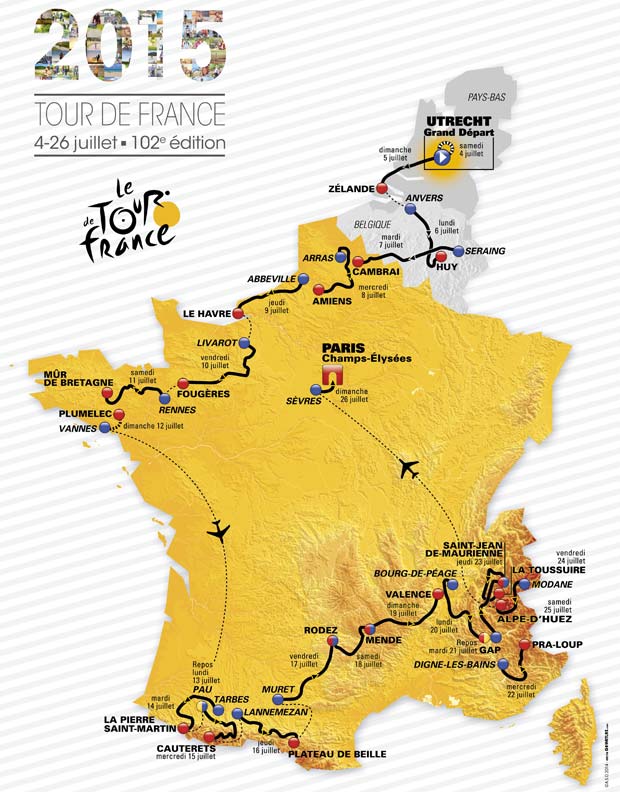 The first thing to note is that the Grand Boucle ain’t so much of a boucle – or belt – as it is a pair of lopsided braces that seem to holding up a pair of Western Europe trousers across a badly tucked-in French shirt. The route of this years race follows parallel lines down the North Sea coastline before a long transfer and a opposite (and far more mountainous) trek up the Mediterranean coast. After last years traverse of Eastern France it was only fair that the West got more of a share this year but it doesn’t make for satisfying map-making..

The 2015 Tour starts in Utrecht and spends three and a half days in the Netherlands an Belgium before finally reaching French soil late on Tuesday. This is only unusual in that we had a foreign start last year as well and these things are normally alternated like the clockwise/anticlockwise shift that gives preference to either Pyrenees or Alps as the decisive last set of mountains. We know that the Grand Départ is back in France next year at Mont-Saint-Michel so maybe this is just a blip..

After the sole Individual Time Trial to kick things off in Utrecht the profile looks fairly benign for the first week and a half but in fact it hides a number of dangers that are designed to shred the peloton from the get go. Punchy Spring Classic climbs, open crosswind run-ins and cobbles are strewn across the opening stages and will strew riders across the road and the GC in equal measure. The uphill finish on the famous Mur de Huy (Stage 3) and slightly less famous Mur de Bretagne (Stage 8) and pavé on the road to Cambrai (Stage 4) will test the peloton’s willingness to sit back and let others make the pace in what is sometimes the ‘phoney war’ of the pre-mountain stages. The old adage that the Tour “can’t be won the first week but it can be lost” never seemed more appropriate.

Those teams who do lose riders in the first week – and in a large, nervous peloton contesting the biggest race of the year this always happens – will be hugely handicapped by the time the Team Time Trial arrives on Stage 9. Unusually late in proceedings, going into the undulating 28km course a couple of riders light could be catastrophic for teams with even Top 10 GC ambitions. It remains to be seen if bringing Tour debutants like Alex Dowsett (MOVISTAR), especially brought in for his TT skills, is a gamble that pays off.

After the transfer down South and at least the comfortable familiarity of a rest day in Pau, the Tour restarts and immediately confirms that it is entirely different prospect from that which has gone before. Stage 10 brings the first summit finish; an hors category monster that presents itself with only the preamble of a couple of Cat 4 molehills. In fact, by the time the riders reach the base of La-Pierre-Saint-Martin and face 15.3km at an average of 7.4% they still won’t have tackled anything more strenuous than Cat 4 climbs and the two Cat 3 Murs. Stage 10 is Bastille Day too so the whole of France will be en fete hoping for a Pinot or Bardet to climb into yellow..

From there on in the race remains relentlessly saw-toothed. Even the exclusion of the Col de Galibier on the final day due to a landslide blocking a key tunnel can’t hide the fact that this a back-loaded race to keep the grimpeurs slugging it out each day until day. The litany of summits packed into the remainder of the race is frightening, causing even Chris Froome to momentarily consider taking on the Giro instead. Aspin, Tourmalet (Stage 11), Portet d’Aspet, de la Core, de Lers, Plateu de Beille (Stage 12), de la Manse (Stage 16), Allos, Pra Loup (Stage 17), Glandon, Croix de Fer, La Toussouire (Stage 19), Croix de Fer again and then, finally, specifically saved until the very last; Alpe d’Huez (Stage 20), where we can expect the mother of all parties at Dutch Corner regardless of whether the maiilot jaune is still up for grabs at this very late stage..

The 40th anniversary of the introduction of the Mountains Jersey is partially the reason behind this exceptionally latter stage lumpiness but you do feel that it is also designed with the big four riders in mind. Nibali, Froome, Contador and Froome all excel in this terrain – despite Froome’s initial misgivings about a lack of TT’ing – and we hope that they trade attacks, blows and jerseys all the way the Alpe. The race was shorn of spectacle last year by Froome and Contador’s untimely exits and Nibali was left with as many “what-ifs” as “well dones”. The first part of the race is similarly testing but surely Froome, Contador and Quintana’s luck will be better this year and we hope all be unstanding for a showdown worthy of the “Hollywood Climb” as the Alpe hs been dubbed in some cycling circles…

With the race decided, the battered peloton will then transfer to Paris and the 40th anniversary of the Champs Elysee finish.  With Marcel Kittel missing, the sprinters honours does seem more open than for the past two years. It remains to be seen of Mark Cavendish will re-fill the gap he owned for four years before the coiffured German to town, or if others like Nacer Bouhanni or Bryan Coquard can usurp what must be viewed as an empty crown. 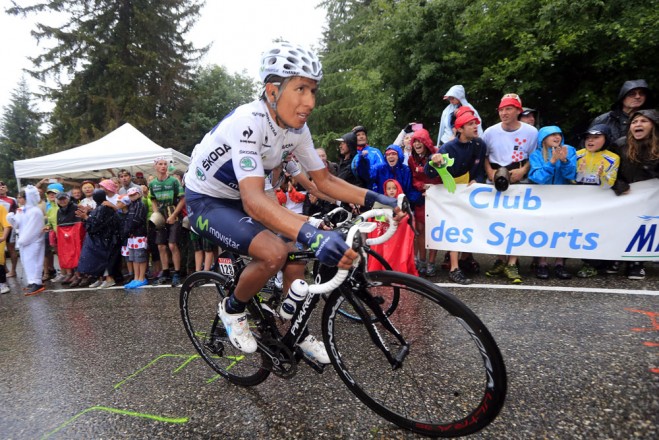 How much sleep the riders get on the night before the start of the Tour is debatable. Nervous tension is at a high and tiredness has yet to kick in.. Fatigue will ultimately play a major role in the outcome of the race and the sleep of the exhausted is rarely troubled by visions. But for now, for tonight, anything is still possible and there will be 198 dreams of their mark being made on the greatest cycling show on earth.. Sleep well everyone..

Money where the mouth is time: