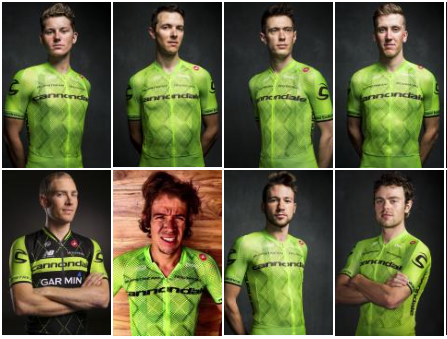 Looking through this year’s World Tour team mugshots and you might get the impression that team owners are keen readers of The Jersey Pocket. After 2015’s many abominations, it was a much harder task picking out a long list for this year’s awards as the level of photos seems to have risen significantly. The number of photoshop aberrations has fallen and Taylor Phinney has swapped his previously exposed chest hair for a much less nauseating beard. But our energy is boundless and a thorough(ish) scouring of the offerings have thrown up some interesting ones.

The preponderance of Black in the pro-peloton has been well documented – not least in these here pages – but doubling up black kit and a black background isn’t the thing that gets Giant-Alpecin onto the podium this time. They wisely dropped the outdoor location that earnt them the top spot in 2015 but something weird is still going on. Perhaps it’s a side effect of all that caffeine shampoo but check out the neck length of all these guys.. Simon Geschke is wisely hiding his giraffe-like head-holder behind a fulsome beard but either side of him Johannes Fröhlinger and cyclo-crosser Lars Van Der Haar have the appearance that their craniums might actually wilt like flowers when the season heats up..

Holding onto their 2015 3rd place are Astana who seem to be hiding a dirty secret amongst their otherwise rigid format of facing the camera with arms behind the back. Michele Scarponi (bottom left) has the posture and inane grin of a man who knowingly has his knob hanging out of his shorts just off frame, and all the others look like they are desperately stifling the laughter that such a stunt would create. Nibali (top right) and Tiralongo (bottom row, 2nd from right) look like they are going to crack first…

Photoshop 101: If you are going to put one rider’s head onto another rider’s body, it’s a really good idea to place them miles apart in the mugshot line up.. Putting them next to each makes it really fucking obvious that you have done it, even when you have crassly digitally changed the skin tone of the ‘donor’ body for the second rider… Not that that has stopped Lampre Merida from doing that with Chun Kai Feng (2nd row, 3rd from left) and Roberto Ferrari (2nd row, 3rd from right). D’oh! 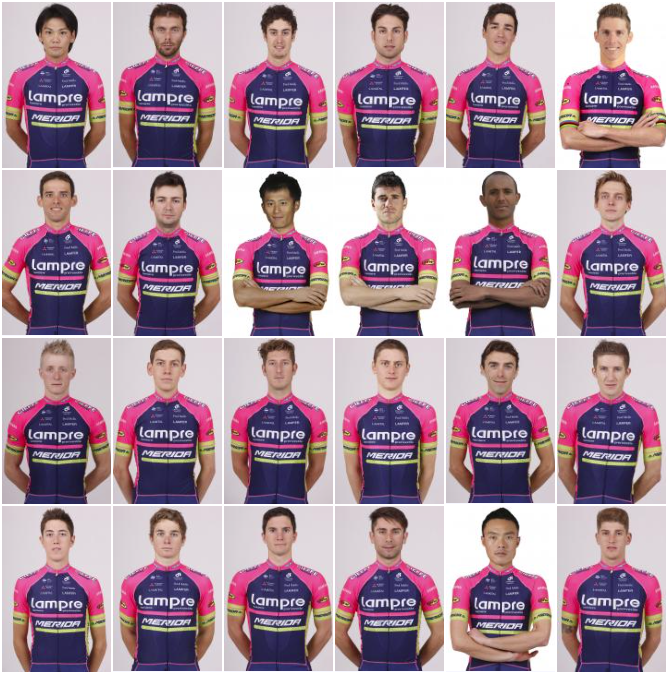 You have got to feel sorry for poor Rigoberto Uran. Not only does he have to wear that increasingly hideous Ride Argyle kit but he appears to have been kidnapped and is being held against his will in a cell whose walls he has smeared with his excrement. It’s the only explanation as surely a soigneur or maybe even the photographer would surely have said, “I know we can’t get the sympathetic lighting and artful poses that the guys in the studio got, but let’s at least wipe the shit off your face before we take your team shot, Rigo..” We can’t ignore his plight and should start to raise a release fund as soon as possible. #FreeRigo

We were really intrigued to see how LottoNL-Jumbo would manage to squeeze Steven Kruijswijk’s (bottom left) immense (and much loved) shoulders into the narrow portrait format. At first we thought that they had come up with clever solution by making the riders adopt a 3/4 profile to compensate. That’s fine. But then we noticed that George Bennett (top row, 3rd from left) was looking a little bit too much like one of those ‘almost real but in reality quite dodgy’ avatars of famous footballers that you get on FIFA2016.. Something clearly isn’t right there. In fact, hang on a minute, haven’t we seen those shoulders somewhere before.. Yes, they are Steven bloody Kruijswijk’s!! What a cheek!! Listen, you can swap heads all you like but you leave Steven’s shoulders alone!