Michal Kwiatkowski’s lung-bursting lunge on the Via Roma to win the 2017 Milan-Sanremo was unexpected in many ways. The Team Sky rider was a 33-1 shot at the start of the 291km, 7 hour, 8 minute epic and many would have said that his odds were even longer by the time he approached the finish line with just two others. Quick-Step’s Julien Alaphillipe was in the favoured slot at the back of the trio but the reason for continued scepticism was the instigator of the select finale- the irrepressible Peter Sagan. With 200m to go Sagan had launched his usually devastating sprint and to all intents and purposes it was all over bar the Haribo-eating.. Surely not even the rider nicknamed Kawasaki could catch him.

But no. The World Champion did not cross the line first with arms aloft or beating his chest as we all expected. The rigours of the longest race on the calendar and, most importantly, the work Sagan had done to blow the tightly controlled race apart on the upper slopes of the final climb of the Poggio, told on his legs allowing Kwiatkowski – World Champion himself in 2014 –  to force his way level and then a crucial inch in front of the man he has been racing against since junior days. Sagan, in the end, was perhaps a couple of Gummi Bears short. 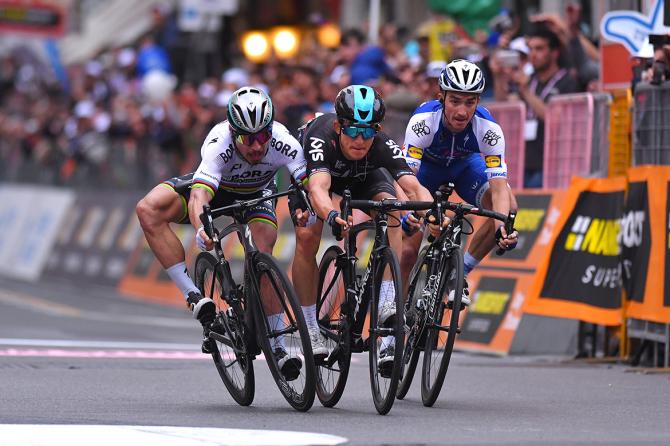 The desperation of the double bike throws and the full commitment to the cause of winning the first Monument of the 2017 was wonderfully, iconically clear. Photographers, massed just beyond the finish line were treated to, and no doubt terrified by, the sight of Sagan careering into the side of Kwiatkowski as they both fought to stay upright and true. The lensman scattered and the riders – both incredibly skilled bike-handlers – buffeted themselves beyond them to safety and celebration. The photo has become an instant classic; Sagan throwing a knee out for balance, his chain partially hanging off the front chainring; Kwiatkowski’s arms frozen in tense ripples from the effort but both with eyes only for the line. It’s a direct echo of the famous Anquetil-Poulidor shoulder rub on the Puy de Dome in the ’64 Tour – and a reminder of the occasional duel-like nature of cycling.

All the Monuments are defined as much by their distance as by the parcours but nowhere is that more true than at Milan-Sanremo. Lacking the pavé or côtes of the other Spring Classics, in La Primavera the peloton is hollowed out from the inside rather than whittled away from the outside. Riders are tired out rather than blown away. Your chance of winning often goes out with a whimper rather than a bang as the pace is ratcheted up and your reserves slowly start to say, “Enough”. Cavendish’s backslide on the Cipressa looked to be a classic case of ‘no more legs’ but as Tom Dumoulin held the pace on the Poggio we expected a little bit more of the same and then a  regrouping for the bunch sprint.

As Dumoulin swung off the front with 6.5km to go there was no reason to think any different. Sky were in attendance in numbers and looked to be primed to take over the pace-making for their man Viviani. After a few years of threats of route tinkering, the race organisers have bowed to the demands that the fast men should have have their chance at a bunch sprint for a Monument. And in a way they did.. The expected gaggle of Kristoff, Gaviria, Demare, Degenkolb, Bouhanni, Viviani, Ewan, Cort Nielsen, Matthews and Colbrelli would have made up the Top 10 were it not for Sagan’s last gasp attack that broke their rhythm.

Before that the race was something of a subdued affair – the pre-race speculation was tempered by the lack of route changes and the weather was fine, if not stunning. It certainly lacked the ice and snow that made the 2013 edition so memorable. You almost get the feeling that Sagan threw his particular spoke into the wheels of the sprint trains simply because he was starting to feel that the race need something to liven it up. Despite the fireworks that the peloton had passed through earlier on the Ligurian coast road, it just wasn’t “Sagan-esque” enough.

When it did come, the attack was truly devastating. Sagan seemingly shifted three gears and immediately forged a gap of 15-20 metres. Degenkolb and Colbrelli failed to follow and for a few moments it seems that we might be looking at another lone victory like his maiden Monument in Flanders last year. But Kwiatkowski and Alaphilippe were able to regain the wheel before the summit and all three plunged down the twisting road with around 15 seconds on the lined-out chasers, Sagan leading the way tucked down on his top-tube.

Having been lit-up so wonderfully by the Bora-Hansgrohe rider, it was therefore doubly strange that it was Team Sky who came out on top. The team have tried to shake up this race on the final climbs before, with both Ian Stannard and Kwiatkowski making late but ultimately doomed attacks in recent years. Coming onto the Poggio Sky were in typically rigid formation but what their numbers allowed was that most rare of things for them: options. They hadn’t shown their hand too early, they plenty to guys to hold back and continue to support Viviani and, crucially, they had one of only two men man who could go with Sagan when he attacked.

Kwiatkowski’s 2016 move to Sky was initially labelled as a “vanity signing’ in some quarters. As had proved the case with Cavendish in 2012, it was hard to see where he might fit into their highly focussed system, and his first season did little to counter that feeling. But the 26 year old has firmly found his feet this year and is riding with the same urgency and purpose that he had in his World Championship year. He seems sure to feature heavily in both the upcoming Tour of Flanders and the Ardennes Classics, where the rivalry with his old adversary Sagan will be renewed once more. Kwiatkowski will be hoping to come out on top again. 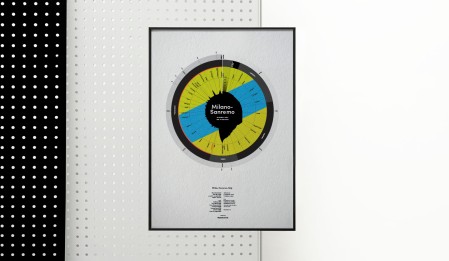 Our 2016 print is currently discounted by 25% HERE