There is an old saying which runs “Some cyclists are born great, some have greatness thrust upon them, and some dress up like Caesar and demand attention until it’s impossible to ignore their greatness..” Mario Cipollini, who celebrates his 50th birthday today, is probably unique in belonging to all three categories.

You do get the feeling that the celebrations at Casa Cipollini will neither be understated, nor for the fainthearted. The Lion King – to use his other nickname – is as notorious for being a no-holds barred bon viveur as he was a sprinter. Never one to shy away from a good time and a bit of self-publicity but seemingly pathologically averse to French mountains, Mario’s birthday party could well last longer than some of his stints on the Tour de France. He is the man who smoked cigarettes whilst riding. The man who was papped having sex with a glamour model on a public beach. The man whose bike business marketing revolves around him being a cross between James Bond and The Hulk. And invariably naked. 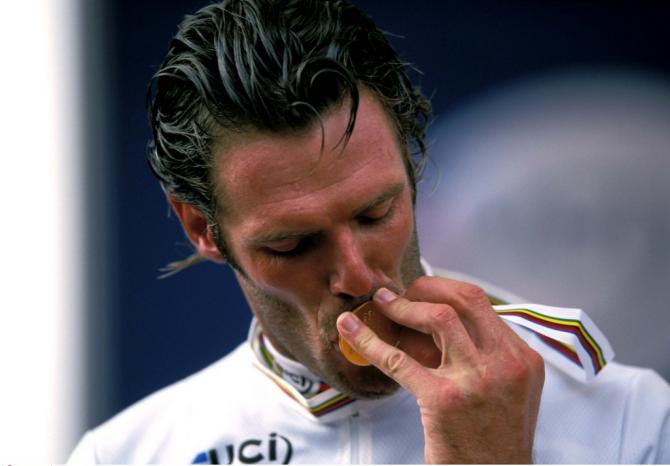 But of course there is more to Mario than just the myth. An incredibly accomplished bunch sprinter, he cast a broad-shouldered shadow over the Italian racing scene of the 1990’s. His Saeco team is often cited as being the first to fully leverage the power of a sprint train and he can therefore be considered as one of the first ‘modern’ sprinters. Super Mario won an incredible 42 stages of the Giro d’Italia, 12 in the Tour, a Milan-Sanremo and a World Championship (which he milked to the nth degree by wearing rainbow-striped EVERYTHING for most of the following season, attracting the usual fines from the UCI).

Cipollini was also the complete antithesis of the other contemporary darling of the tifosi – the emotionally fragile, bird-like Marco Pantani – which helped cement his place in the country’s eyes. You get the feeling that they wanted Mario as much as he needed them. And when Pantani faded from view in the early Noughties, Mario was big enough (and self-interested enough) to take the limelight for the both of them.

We would love to be fly on the wall at the celebrations tonight..