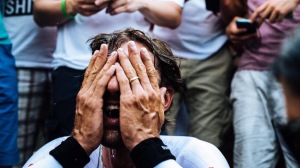 COMPETITION TO WIN A COPY AT THE BOTTOM OF THE PAGE..

As a self-confessed trivia and fact addict, one of my very favourite books as a teenager was Pears’ Cyclopedia. Not a particularly challenging text for an adolescent I will admit but, in pre-internet days, it was the single best source of a wide range of knowledge that I could lay my hands on. Being then of very limited means (variously pocket money, a paper round, a Saturday job as a kitchen porter, eventually a student loan) I tended to buy one every two to three years rather than each annual publishing. I was never disappointed by each new edition that somehow held a world’s worth of knowledge in a pocket-sized paperback. Looking back now from the considerably expanded knowledge base that we can call upon with just a few taps and swipes, it seems as quaintly antiquated as index cards or typewriters (both of which I also cherished at that time) but, judging by the goosebumps which prickled up and down my back earlier this week, the thrill of a receiving a book that portends to hold ‘all the answers’ creates the same feelings of excitement as it ever did.

Feargal McKay’s “The Complete Book of the Tour De France” (Aurum Press, £25 Hardcover) is by no means pocket-sized. Even in this pre-release paperback format it weighs something close to an Arenberg cobble and, in the new hardback edition that will be released on June 5th, it would probably do similar damage to a speeding front wheel*. But unlike the famed pave blocks that will define Stage 5 on this year’s Tour, this heavyweight cycling compendium can tell you everything you might ever want to know about the Grand Boucle. The old saying that “Knowledge is Power” certainly becomes more compelling when the source of knowledge that you are quoting from could also be used to knock your enemies senseless with a single blow. Try doing that with an iPhone… 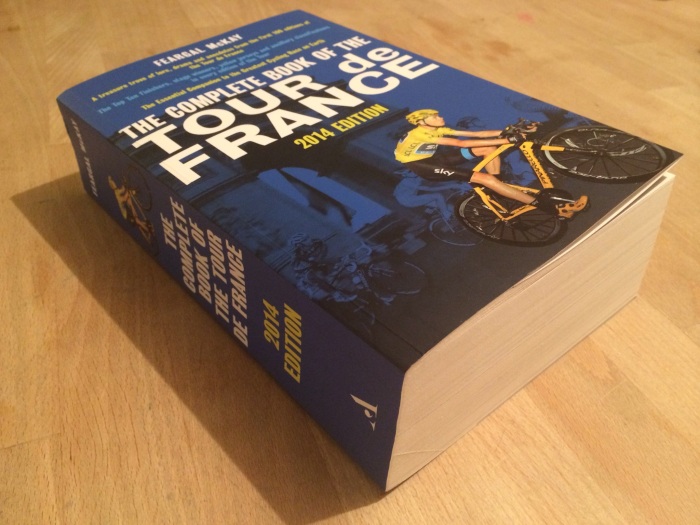 The presentation of apparently endless facts about an annual bike race run in (roughly) the same format for over a century could ostensibly be a dull task to assemble and thereafter be an even duller task to read. Most encyclopaedia’s try to get around this issue by making sure there are a liberal amount of maps, diagrams and illustrations peppering the facts. Pears’ went a degree further by introducing a dozen or so ‘Special Topics’ to each edition. Sitting alongside the more usual Scientific, Historical and Geographical facts, these Special Topics brought some more subjective discussion and debate to the otherwise potentially mundane world of the almanac. More importantly they also delivered some context, personality and story to much of the rest of the book. In order to provide some context to the dry facts and figures that he has meticulously assembled, McKay has also wisely chosen to tell the stories behind the Tour’s various editions and developments, covering its scandals and glories in order provide a definitive statistical account of the Tour and the circumstances under which they were achieved.

And he has done it very well. McKay’s writing has an easy, conversational style that makes you imagine that you are listening to a learned friend telling you about each Tour. Knowing of his Irish background lends an accent to this imagined narration and the book, surprisingly for something that you had expected to be a simple compendium, quickly becomes more of a fireside Jackanory, to be consumed over many evenings, one chapter at a time. Time moves on but the roads and mountains remain and the wheels still turn to conquer them.

So, where to begin? Not necessarily at the beginning. McKay has naturally arranged his book in chronological order (and consumed that way the accompanying narratives would build to give a comprehensive – and comprehensible – understanding of the Tour’s progress through the decades) but one of the real joys of an almanac is that you don’t need to devour it in any particular order. In fact, there is a strong case for saying that you should never actually read it at all. Instead you should either consult it for a particular reason (just who was the Lanterne Rouge in 1937?) or you should just browse in order to allow it to reveal it’s secrets to you in a random, chance-like fashion by flipping pages until a word or name catches your eye. Anquetil, Aucouturier, Alpe D’Huez; Pottier, Pantani, Puy de Dome; Garin, Gimondi, Galibier… It’s an Aladdin’s Cave of Tour History, Tour Geography, Tour Science and Tour Politics. All you have to do is walk in.. 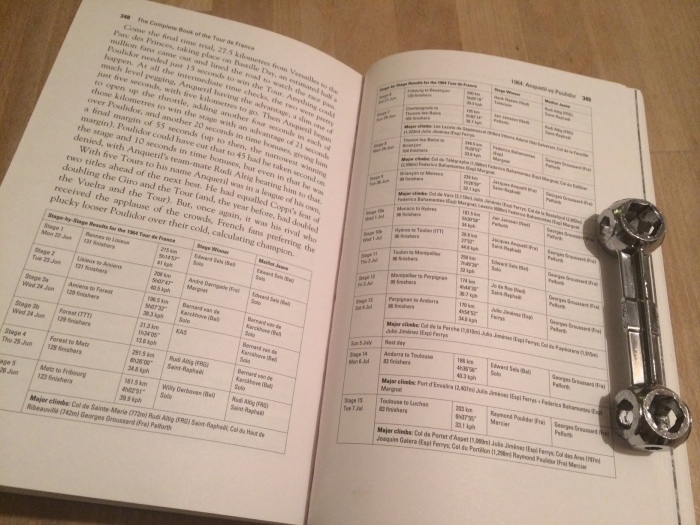 The stories that you find next to the stats change as the motivating forces behind the Tour change from the requirements of marketing to requirements of politics, which in turn give way to commercialisation, which in turn give way to a need for regaining credibility. Throughout the main characters rise and fall as time takes it’s inevitable toll on all and yet the lists goes on. The charts at the end of each Tour story are presented in the same prosaic fashion throughout and, stripped bare of all the drama, intrigue and effort that the narrative has just given us, returns the riders to the immortality of the statistic. All are equal. Geants de la Route.

I would dearly love to see a future edition that included simple maps of each running of the Tour. Done in a consistent way, which was in keeping with the unchanging tables of Stage and Overall Winners, would not spoil the power of their simplicity but would add an extra dimension to the ‘Completeness’ of the book and would help chart the early decades of growth in particular. I don’t think the postmen around the country would thank me for adding an extra 50 or so pages to the already weighty volume but I think the cycling buffs (who will hugely enjoy this excellent book without them) definitely would.

Aurum Publishing are offering a free copy of The Complete Book of the Tour de France as a prize in the very first Jersey Pocket competition. Just send an email to thejerseypocket@gmail.com and a winner will be picked at random on June 5th.

* 02.06.14 update – Aurum have confirmed that the published book will be a paperback, not a hardback as initially intended.

Team Sky (or Sky Procycling as they were until the start of this season) have undoubtedly changed the way that cycling is perceived in this country. Although they were set up from the start as an internationally rostered team – albeit with a very clear aim of initially achieving success in the Tour de France for a British rider – they were often described as a de facto British national road team. The overlapping managerial & coaching staff from the national track squad adds fuel to this conflation, especially for the legions of new cycling fans that the team’s success has turned onto the sport. It was also inevitable that many of the existing and upcoming British riders would find a home at Sky where the people, program and language were most familiar. But what of those British riders who choose not to ‘Take to the Sky’ with Brailsford and Co? Are they getting a fair share of cycle fan’s support when faced with the media-attention black hole that the Tour-winning team creates wherever it goes?

END_OF_DOCUMENT_TOKEN_TO_BE_REPLACED

With both the Tour de France and the Giro d’Italia set to start outside of their own borders next year it seems like a good time to have a look at this increasingly regular phenomenon. In 2014 the Giro will spend three days in Ireland during May, visiting both Belfast and Dublin, before Le Tour comes to Yorkshire, Cambridge and London in July. Whilst the Vuelta tends to be much more of an insular affair – having only started outside of Spain twice in it’s 60 year history –  a fifth of all the Giro starts since it’s first foray to San Marino in 1965 have been foreign affairs.
The Tour is an even more international event with over 20 foreign starts dating back as early as 1954 in Amsterdam. This began a sequence of around three Tours each decade commencing in foreign parts up until the Millennium. After that they increased again and Tour De France race director Christian Prudhomme clearly stated his aims in 2007 when he said that 3 out of every 5 Tours should begin abroad. Talk during the Armstrong era of a start on American soil may have failed to materialise because of the very real logistical issues of transferring the entire race and it’s vast entourage across 5 time zones of Atlantic Ocean but the appetite to take the Tour ‘on tour’ is self evident.