The inaugural Dubai Tour was deemed a success by many commentators and journalists attending the event, and if they meant a triumph of style over substance then they would be entirely correct. We saw many, many pictures of the Burj Khalifa – the worlds tallest building – and almost as many of the Dubai Police Force’s utterly ridiculous fleet of supercars, which include a Bugatti Veyron, Ferrari FF and a Lamborghini Aventador. There were a few of camels, lots of sand and even a couple – hidden in amongst the rest – of cyclists in action.

Taylor Phinney won the opening day Time Trial and never looked in danger of relinquishing his overall lead across the 4 day event. Marcel Kittel, obviously concerned about having his much-talked about hair upstaged by Phinney’s own remarkably idiosyncratic barnet, proceeded to wrestle back the headlines by winning three sprint stages on the bounce. The long awaited resumption of battle between the German Giant and our own Manx Missile never got going, with Cav variously misfiring, miscueing and mishapping in the desert. It’s very early days in the season of course but that doesn’t seem to be affecting Giant Shimano who have started in majestic form. Cav, and reunited lead-out man Renshaw, clearly have some ground to make up.

The concept of putting on road cycling in Dubai is a bit of an odd one. Having spent the last couple of decades reshaping their country’s small coastline, thumbing a collective nose at the desert and the unrelenting harshness of the climate, it appears counter-intuitive to hold a multi-stage outdoors event there. Such an exercise necessarily becomes a point-to-point of tourist sites, taking in the key buildings with a bit of featureless desert or some equally bland downtown sprawl in between. Fine for the first time maybe but it remains to be seen if the novelty can last more than a couple of seasons without significant tinkering.

Things started looking better for Cav’s OPQS team once the focus shifted from the ‘instant city’ of Dubai to the Gulf state of Qatar. A clever Stage 1 win for breakaway infiltrator Nikki Terpstra and then an imperious sprint from Tom Boonen on Stage 2 made a clear statement about the Belgian team’s mastery of the crosswinds that ravage this particular desert parcours. With 6 riders in the top 13 going into the TT day, OPQS looked set to continue their good run in this otherwise pretty featureless race. Orica GreenEdge’s Michael Hepburn took the time trial win ahead of Belkin’s Boom, Tinkoff’s Bennati and Cancellara, who was surprisingly back in fourth. Terpstra rounded out the top five to retain the Gold jersey going into the second half of the week.

Qatar is famously hosting the 2022 Football World Cup and, more famously, is probably going to have to shift the entire event from it’s traditional summer spot back to January to get around the small matter of it being entirely too hot to actually play or watch soccer there at that time of year.  Compared with that monumentally suspicious decision, holding a week long bicycle race in a barren, wind ravaged desert looks quite sane.

Echelon training in the Qatari flatlands.

On Stage 4 the crosswinds changed to a tailwind that blew the pent-up peloton clear across the peninsula at record-breaking speed. Officially credited as being the fastest average speed in a stage race EVER, the bunch covered the 135 kilometres in under two and half hours, achieving an staggering average of 56.816kph. Boonen won again, taking the sprint so far ahead of schedule that the VIP’s hadn’t even been served their lunch. Andre Greipel managed to momentarily deflate the OPQS party by gurning his way to the front in the Stage 5 sprint and reminding us that there is another big German sprinter that may need to be reckoned with later in the season. Terpstra remained in the lead ahead of the final day with team-mate Boonen in second at 17″. Lotto Bellisol’s Juergen Roelandts lay in third at 20″ and Sky’s Ian Stannard in fourth at 37″ but it was hard to see anything upsetting Terpstra. Could the crosswinds offer a final twist? In a word: No. The final stage was wrapped up with a bunch sprint win by FDJ.fr’s Arnaud Demare, with Terpstra and all the GC riders safely in the bunch.

OPQS utterly dominated the race, finishing with 5 riders in the top 10. Their ‘other’ British rider, Andy Fenn, (who The Jersey Pocket will be sheepishly following closely this season having only just discovered him in the peloton in the last few days despite this being his third year) finished ninth overall, helped on by a top 4 finish at the brilliantly named Camel Race Track > Al Khor Corniche stage earlier in the week.

And so onto the third of the desert races. Another change of personnel and thankfully a change of scenery. Oman is different from Dubai and Qatar in that it has abundant corners and at least one impressive incline. Froome, Nibali, Sagan and Rodriguez make up the heavyweight end of the line-up, though the Italian was expecting to jump ship early if his wife went into labor. No time-trial here to win and defend; just a straight 6 stages, split pretty equally between sprints, lumpy Classics warm-ups and testing mountains.

Greipel, clearly warming to the conditions in the Gulf, won the first sprint stage as expected but was back in the pack on stage 2 when Katusha’s Alexander Kristoff held off more noted challengers to take the win. Greipel bounced back on Stage 3, giving weight to speculation he could do well in the rejigged Milan-San Remo by beating Sagan in the sprint and taking the leader’s jersey back from Orica GreenEdge’s Leigh Howard. Greipel and the pack had reeled in a veritable super-group of a late breakaway consisting of Sagan, Froome, Cancellara and Stybar to claim his 5th win of the season and putting him at the top of the results table.

Stage 3 was rightfully overshadowed though by the death of IAM Cycling rider Kristoff Goddaert, the Belgian rider who was killed on Tuesday in a collision with a bus whilst training in Antwerp. He had finished 34th in the Tour of Qatar just 4 days earlier. IAM led the roll-out from the neutral zone as the peloton struggled to come to terms with the loss of one of their own.
Stage 4 neatly set the scene for the Stage 5 Queen Stage. BMC’s Greg Van Avermaet attacked during the day but it was Froome who exploded the peloton by jumping clear with ex-teammate Rigoberto Uran up the final ascent of the climb behind the Ministry of Housing. The Tour de France winner was unable to stay clear though and it was Uran, Nibali and Sagan who made a gap on the descent. Sagan’s excellent bike-handling skills allowed him to jump a footpath on the final roundabout and leave the others to go the long way round. They caught the Slovak before the line but he toyed with both them and the closing pack as he claimed his first win of the season and the leader’s jersey. 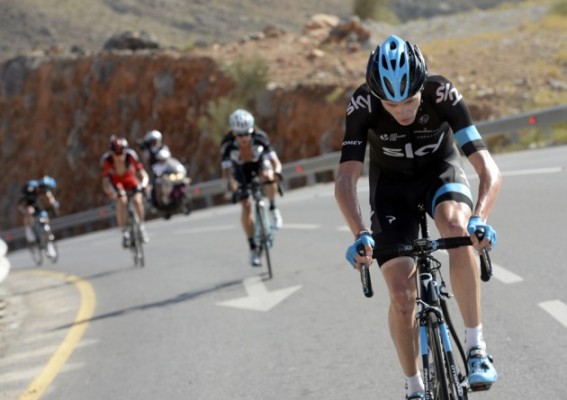 Much like Mrs Nibali, Stage 5 was expected to deliver. Unlike the Senorita of the Shark of the Strait, who kindly held on to allow Vincenzo to finish the race, Stage 5 did just that. It delivered the cycling equivalent of 10lb twins. With defending champion Froome and the other big names just a handful of seconds back at the start of the day a showdown on the first long summit finish of the season was inevitable. And it was the Sky rider who showed blistering pace to decimate his opponents on the Hors Category summit finish on Green Mountain. After sterling work from his teammate Mikel Nieve on the lower slopes, and a probing attack from Sergio Henao which broke up the pack, Froome turned on the same afterburners that we saw last year on Ventoux and rode everyone else off his wheel. This time it was Tejay Van Garderen for BMC and the consistently impressive Uran who were closest to him at the summit, 22 and 33 seconds back respectively. Everyone else was, well.. nowhere. Froome donned the leader’s red jersey with a 26 second lead to take into the final sprint stage – just one second short of the time he won with last year. Greipel duly won the Stage 6 sprint and Froome came home safely for his first stage race win of 2014.

So what should we make of what the promotors would love to be termed the ‘Desert Classics’? Well, they are here to stay, that is for certain. The money involved will see to that. Dubai is aggressively pushing itself as a starting point for a future Giro D’Italia and the Dubai Tour is an important stepping stone towards that goal. But all the super-cars and super-skyscrapers in the world can’t offset dull routing and a total lack of local interest. Oman is much more varied topographically; it should be able to continue play to it’s strengths and attract a much more heavyweight start list. Qatar is the concern, despite it being much older than the other two desert races. Aside from echelon training in warm weather, it’s hard to see how it will differentiate itself from Dubai as that race gains momentum. Realistically there will be little threat to a race being run by the richest country – on a per capita basis at least – in the world and all three events seem to be included in the streamlined future race calendar being looked at by the UCI. But if the Dubai Tour promotes itself with the expected razzamatazz, and Oman retains it’s more tactical and nuanced racing, then Qatar could quickly become the dull piece of cheese sandwiched between two more slightly interesting pieces of bread. For their sakes – let’s hope those crosswinds keep blowing.

Oman has some work to do too though. For the first big showdown of the year it is woefully covered by TV, with no live coverage whatsoever, and only a hard-to-find highlights package being aired the next day. Despite being organised by Tour de France owner ASO, and having Christian Prudhomme in attendance throughout the week, waiting around an hour to publish the time gaps of the top ten finishers after the key mountain stage is not good enough for a 2.HC event. This really needs to be addressed before the next edition. It’s great getting the best riders crossing swords for the first time in the year and having it played out in front of the spectacular scenery but no good if you don’t share it with anyone. The heartache involved in simply trying to follow the race day by day is enough to make me think twice about doing it again next year. Making the team’s lives easy by all being located in the same hotel throughout the race is a key premise of the race’s success – so why not show a little more love to fans as well by making it more accessible for them to follow too?